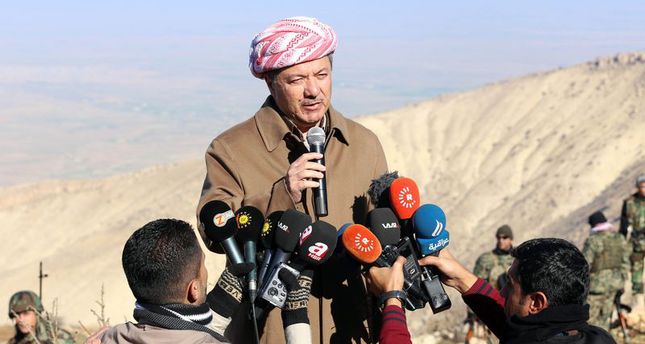 by Dec 23, 2014 12:00 am
Iraqi Kurdish leader Masoud Barzani hailed advances by peshmerga fighters against the Islamic State of Iraq and al-Sham (ISIS) group Sunday as they battled the jihadis for a northern town with the backing of U.S.-led strikes. Thousands of the autonomous Kurdish region's peshmerga forces launched a major operation on Wednesday, which broke the second ISIS siege this year of Mount Sinjar. The Kurdish offensive threatens the links between the city of Mosul, the main ISIS stronghold in Iraq, and territory the militants control in neighboring Syria. "During the past 48 hours, the peshmerga opened two main routes to Mount Sinjar," Barzani said during a visit to Mount Sinjar, adding: "We did not expect to achieve all these victories."

In addition to breaking through to the mountain, "a large part of the center of the town of Sinjar was also liberated," Barzani said of the district's main settlement to the south. The Kurdish regional president said the peshmerga forces might join an operation to retake Mosul itself.

"We will take part if the Iraqi government asks us, and of course we will have our conditions," he said, without specifying what these might be.

The Kurdistan Regional Security Council said on Sunday that peshmerga forces were advancing inside the town of Sinjar, "engaging and suppressing (ISIS) positions" with the support of air strikes by international forces. Explosives disposal teams also cleared key roads north of Mount Sinjar, it said. The U.S.-led coalition said its forces launched 13 airstrikes against ISIS in northern and western Iraq on Sunday, including four near Sinjar. The Syrian Observatory for Human Rights monitor reported "at least 12" coalition airstrikes on ISIS positions north of Syria's second city Aleppo on Sunday.

ISIS spearheaded a sweeping offensive that has overrun much of Iraq's Sunni Arab heartland since June, presenting both an opportunity for territorial expansion and an existential threat to the country's Kurdish region.

Multiple Iraqi divisions collapsed in the early days of the militant advance, clearing the way for the Kurds to take control of a swathe of disputed northern territory that they have long wanted to incorporate into their autonomous region over Baghdad's objections. But after pushing south towards Baghdad, ISIS then turned its attention to the Kurds, forcing them back towards their regional capital Irbil in a move that helped spark U.S. air strikes against the jihadists. Backed by the raids, which are now being carried out by a coalition of countries, Kurdish forces have clawed back significant ground from ISIS. The conflict seems set to redraw the internal boundaries of Iraq in favur of broader Kurdish control in the north.

In his remarks on Mount Sinjar, Barzani said: "We will not leave an inch of the land of Kurdistan for (ISIS), and we will strike (ISIS) in any place it is located." That siege was broken and many of the civilians evacuated, but others stayed behind and were again besieged by the jihadists in October.