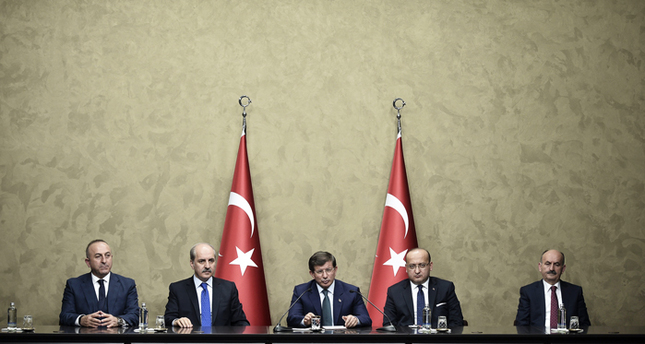 Davutoğlu made the remarks at a press conference at Ankara's Esenboğa Airport before his departure for the Macedonian capital, Skopje.

"We are happy to observe that a positive milieu is emerging where the reconciliation process is now back on track," he said.

"Our government has never displayed doubt or hesitant attitude about the reconciliation process," he said.

Davutoğlu cautioned that the reconciliation process is not a process that can bear solution instantly or in a single day.

"It is a process during which we have made it through major hurdles and proceeded to key phases as we walked with determination," he added.

Davutoğlu also said methods to solve the issue were discussed that would eventually be used in the next steps of the process.

The reconciliation process was launched last year as an initiative of the Turkish government that aimed to secure an end to the decades-long conflict with the outlawed PKK which so far claimed the lives of more than 40,000 people.

The deadly October protests over fighting in the Syrian Kurdish town of Kobani, close to Turkey's southern border had threatened the process. Dozens of people, including two policemen, were killed as several pro-Kurdish protesters took to streets across the country under the pretext that the Turkish government was allegedly doing nothing to halt the advance of ISIS militants pouring into the Turkish-Syrian border town of Kobani.

Sırrı Süreyya Önder, a member of parliament from the pro-Kurdish party, said after the meeting that the reconciliation process had passed the major crisis sparked by October's Kobani protests despite the fact that many issues remain unresolved.

"The process continues with strong political will and determination. The negotiations have accelerated to achieve a permanent solution based on trust and good faith," Akdoğan tweeted.

Following his remarks to the press, the premier left Ankara with Deputy Prime Minister Numan Kurtulmuş, Foreign Minister Mevlüt Çavuşoğlu, Health Minister Mehmet Müezzinoğlu and Economy Minister Nihat Zeybekci for Skopje where he will be received by Macedonian President Gjorge Ivanov. He will also hold a meeting with Prime Minister Nikola Gruevski in Skopje during a two-day formal visit, according to the Turkish Prime Ministry.