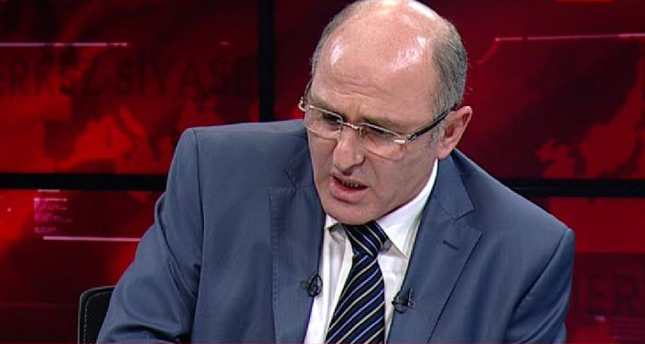 by Daily Sabah Dec 23, 2014 12:00 am
The former head of the police's intelligence unit, Ali Fuat Yılmazer, who is a Gülenist currently under arrest for wiretapping charges, is allegedly the mastermind of the plot which targeted a rival group. Gülenists allegedly conducted an operation against the rival group in 2010 to eliminate their so called 'threat'.

Prominent lawyer and a journalist Fidel Okan refuted the claims that the name 'Tahşiye' was first coined by Fethullah Gülen, the leader of the Gülen movement, in one of his sermons in 2009. Instead, Okan came up with a fresh allegation saying that the first mention of the word was in a report about the activities of the group, which was signed by Yılmazer . If the report's authenticity is verified, the plot which the Gülenist are accused of setting against 'Tahşiye' group, was initiated by Yılmazer.

Lawyer Fidel Okan and Sabah Daily's newsroom chief discussed the operation launched on December 4 as part of an investigation into Gülen movement-linked media staffers and police officers on a private news channel Ahaber, and shared analysis and documents over the 'Tahşiye' case.

The Istanbul prosecutor, who gave the green light for an operation into alleged suspects affiliated with the Gülen movement after a complaint was filed by some members of the group, Tahşiye – a name allegedly introduced by Gülen—issued a detention for 31 suspects on Sunday. Following their interrogations, all of the suspects, except for four, were released leaving no journalist under arrest.

Although media outlets close to the movement have tried to portray the operation as being about curbing 'freedom of the press', the investigation is about offenses such as fabrication of crime and slander.

Contrary to the picture the Gülenist media circles intend to paint of the operation, the suspects were accused of taking part in a plot against a group which they deemed a threat to their entity. The opposing group, which follows similar Islamic principles to the Gülen Movement, was adversely influencing the reputation of the Gülen movement which allegedly led to the suspects plot to 'get rid of' the group.

Ali Fuat Yılmazer, who was the head of the intelligence department of the police at the time, allegedly had his signature on an official report detailing about the activities of Tahşiye group.

The Tahşiye case has created hot debates with many critics and journalist participating in the discussion of how the plot was allegedly constructed. It was initially believed that a sermon which Fethullah Gülen delivered on 3 April 2009, which targeted the group, was the first portrayed of it as a terrorist organization. This sermon was given one year before an operation, which incarnated some members of the group from 8 month to 20 months, took place.

However, new reports and evidence introduced by lawyer Okan, have revealed that the group was first targeted by former police chief Yılmazer in an official report bearing his signature. The report which was dated December 3, 2008—an earlier date than Gulen's sermon— first refers to the group and its alleged activities.

Noting that Gülen himself did not construct the plan, Okan indicated that he had been directed by his personnel over the issue. "He first learns about the group via his followers." Okan asserted.

The name of 'Tahşiye' is also mentioned in the alleged report which further reads:

"Tahşiye group of Nur movement, which carry out its activities in Istanbul, Ankara, Aksaray, Bitlis, Bursa, Elazığ, Erzurum, Kayseri, Konya, Malatya, Muş, Sivas and Van as well as some countries abroad such as France, Germany and Saudi Arabia consists of approximately 5,000 members." The report also stated that the group kept its activities secret to avoid attracting attention.

In the report signed by Yılmazer, the group is also deemed as an obstacle for Islamic reform applied by Justice and Development Party (AK Party) and they are said to see Gülen movement's members as 'hypocrites'.