Turkey reiterates support for Palestinian cause during Hamas leader’s visit 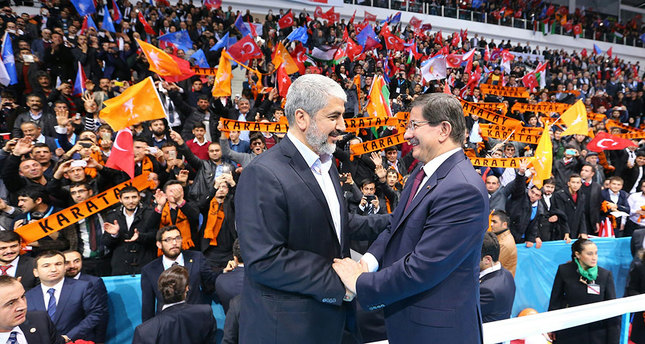 Turkey once again proved itself as a vocal supporter of the Palestinian cause on Saturday after Prime Minister Ahmet Davutoğlu and Khaled Mashal, a senior leader of the Palestinian resistance movement Hamas, attended a congress of the ruling Justice and Development Party (AK Party) in the central Anatolian province of Konya.

During the congress, Hamas chief Mashal praised Turkey as a "source of power" for all Muslims in gratitude to Turkey's leaders for supporting the Palestinian cause.

"A democratic, stable and developed Turkey empowers all Muslims," Mashal said. "We will hopefully save Palestine and Jerusalem in the future just as your people protected Jerusalem, al-Aqsa and Palestine for ages in the past."

Prime Minister Davutoğlu underlined that Turkey will continue to be the voice of the innocent in the world in his speech, saying: "God is witness ... We will make this red flag a symbol of the innocent. This red flag will fly side by side with the flags of Palestine, free Syria and all other innocents' flags anywhere in the world."

Davutoğlu added that Turkey regards the Palestinian cause as its own cause and Palestine's land as holy as Turkish land.

According to sources, busy diplomatic traffic between Turkey and Palestine is expected to continue, as Palestinian President Mahmoud Abbas reportedly plans an official visit to Turkey in January.

Meanwhile, a senior Hamas official said on Saturday that Hamas could govern the Gaza Strip if the Palestinian unity government allows it to do so.

"There is clear laziness," Musa Abu Marzuq, deputy leader of the Hamas political bureau, said at a panel discussion. "Why doesn't the unity government's prime minister visit Gaza and fulfill his responsibilities?"

Rival Palestinian factions – Hamas, which has controlled Gaza since 2007, and Fatah – signed a reconciliation deal in April that led to the formation of a national unity government.

"There are those who say that Hamas is disruptive, which is not true," Abu Marzuq added. "The unity government does not want to undertake any responsibility in Gaza."

The lack of action has hampered the disbursement of public-sector salaries in the coastal enclave, which has been blockaded by Israel for more than seven years.