Erdoğan to use constitutional prerogative to lead cabinet meeting 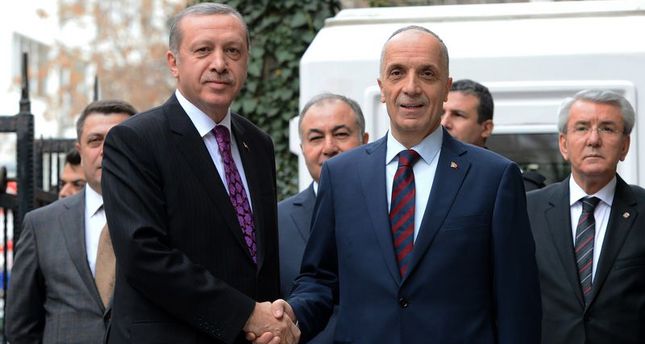 by Nurbanu Kızıl Dec 29, 2014 12:00 am
President Recep Tayyip Erdoğan has announced on Monday that he will be leading the cabinet meeting for a one off session on January 19 to evaluate the current situation. He made the announcement after a meeting with the Confederation of Turkish Trade Unions (Türk-İş) in Ankara on Monday..

"The president symbolizes the head of state in Turkey and I will lead the cabinet on January 19 in Beştepe - -the newly built presidential palace,-." said Erdoğan, noting that he is constitutionally entitled to chairing such a meeting although former presidents have not made use of the prerogative.

He stated that Turkey is governed by a constitutional framework and noted that he is entitled to use his authority in accordance with the constitution.

Erdoğan warned critiques against establishing tutelage over the presidency by claiming that he is not entitled to chair such meetings.

A provision in the Turkish Constitution permits the president to hold meetings with the cabinet when deemed necessary. Accordingly, the president is not constitutionally obliged to indicate when he will chair such a meeting and could decide to chair a cabinet meeting only an hour before the meeting.

Likewise, he is entitled to call the cabinet to hold a meeting whenever he deems it necessary and is not obliged to share when he will use his prerogative with the Prime Minister. The frequency of holding such meetings is also under the discretion of the president even though former presidents have not made use of this prerogative.

The system emphasizes efficiency with providing a popularly elected president who can enact changes in a speedy manner while the separation of powers enables checks and balances in the system.