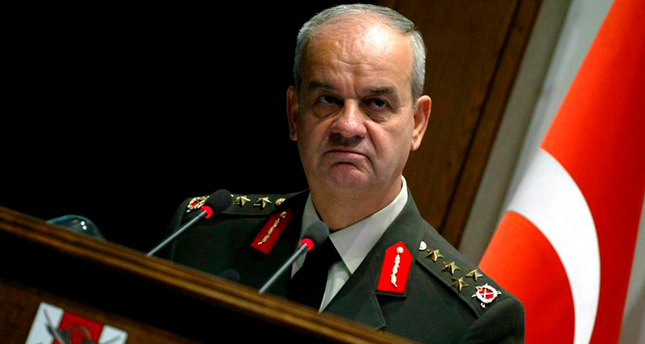 by Daily Sabah Dec 29, 2014 12:00 am
Former chief of general staff, retired General İlker Başbuğ, who was convicted on charges of "establishing and leading a terrorist organization," and "attempting to destroy the government" as part of the Ergenekon trial, said he would file a criminal complaint against those targeting the army with plots.

Başbuğ will reportedly give a statement as a plaintiff at the courthouse in the Çağlayan district of Istanbul.

İlkay Sezer's lawyer said that Başbuğ will give a statement to Prosecutor Mesut Erdinç Bayhan as a plaintiff as part of the investigation called "the plot in Ergenekon." Başbuğ will reportedly file criminal complaints against those who allegedly set a plot against him and other members of the Turkish Army.

Many people reacted against the conviction of members of the Turkish Armed Forces (TSK) as their sentences were announced. Some have contended that the Ergenekon case was manipulated by prosecutors who were linked to the Gülen Movement. The lead prosecutor in the Ergenekon case, Zekeriya Öz, is believed to be affiliated with Fethulah Gülen.

Başbuğ will also give a statement to the inspectors of the Supreme Board of Judges and Prosecutors (HSYK), regarding the prosecutors and judges that were involved in the Ergekon trial.

Başbuğ announced his plan to file a lawsuit via his Twitter account: "Today I will go to Çağlayan court house and file a criminal complaint regarding the investigations that targeted the Turkish Army and its personnel."

Başbuğ was jailed for life in the Ergenekon coup trial pending appeal. Scores of army officers, journalists and lawyers were also imprisoned for their role in the alleged plot to topple the government.