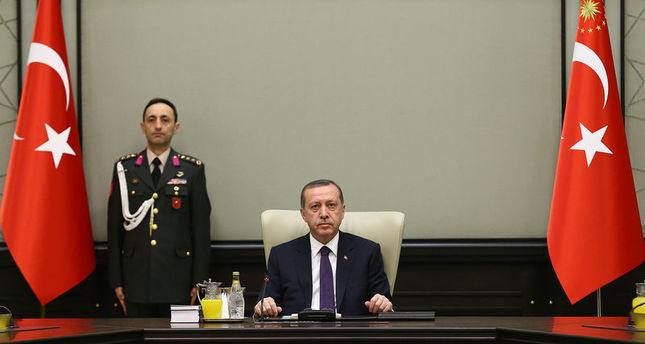 by Daily Sabah Dec 30, 2014 12:00 am
The last National Security Council (MGK) meeting of 2014 was held on Tuesday at the Presidential Palace in Ankara. The meeting of Turkey's top national security body was chaired by President Recep Tayyip Erdoğan. Topics discussed included regional security threats caused by the terrorist organisation the self-proclaimed Islamic State of Iraq and al-Sham (ISIS), the current situation of the training and equipping program for Free Syrian Army (FSA) fighters, and the ongoing cooperation between Turkey and the U.S in this field, and Turkey's ongoing aid to peshmerga forces fighting against ISIS.

The ongoing Kurdish reconciliation process and the future of the process were also discussed in the meeting. Following the October 6-7 Kobani protests that turned into violent clashes between pro- and anti-PKK groups upon calls of the pro-Kurdish Peoples' Democratic Party (HDP) for street protests, similar incidents took place last weekend in the southeastern town of Cizre which left three people dead. Following the incidents, Prime Minister Ahmet Davutoğlu said that the clashes had been perpetrated by outside provocateurs, who have been detained.

Turkey's relations with the European Union were also discussed in the meeting. The top three EU commissioners visited Ankara in early December and they stressed the importance of energizing Turkish-EU relations during their visit. However, heavy criticism by EU's officials that came after the December 14 operation was disapproved of and the EU's approach was not found to be sincere by Ankara. Last week, however, Erdoğan called the president of the European Commission, Jean-Claude Juncker, and extended an invitation to visit Turkey.

Turkey's ongoing fight against the Gülen Movement's infiltration into state institutions that is considered a national threat was also discussed in the meeting. In a previous meeting held on October 30, the MGK publicly documented the movement of the U.S.-based Fethullah Gülen, referred to by government officials as the "parallel state," as one of the leading threats against the country's national security.

The MGK said in a written statement that measures would be taken to combat these networks. "The fight against 'parallel structures' and all other illegal formations, which assume a legal posture, both domestic and foreign, will be maintained with resolve," the statement said.