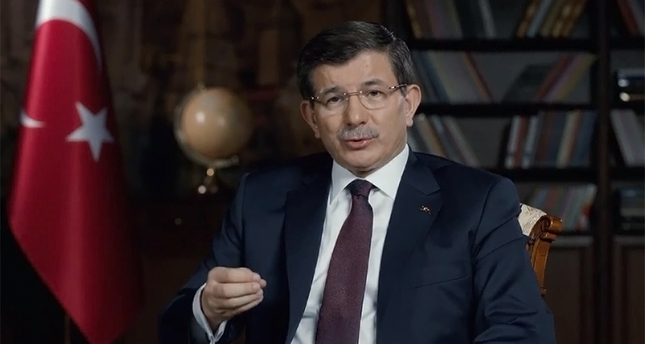 by Nurbanu Kızıl Dec 31, 2014 12:00 am
Prime Minister Ahmet Davutoğlu has stated that 2014 has proven to be a golden year of Turkish democracy, which did not fall prey to chaotic attempts to overthrow the government and establish a regime of tutelage. He made the statement at his televised "addressing the nation" speech titled "On the Road to the New Turkey" on Tuesday, where he evaluated a number of important incidents which took place in Turkey in 2014.

"Structures under the form of a parallel state organization will never get a foothold in this country" said Davutoğlu, referring to the Gülen Movement which is accused of infiltrating Turkish state institutions including the judiciary and police to topple the democratically elected government. He alluded to the December 17 Operation and stated that the perpetrators have attempted to draw a dark picture for the future of Turkish democracy by bringing chaos to the country and ending the democratically elected government.

"2014 was a golden age of democracy for Turkey" he said, noting that the Turkish people expressed their commitment to democracy in the March 30 local elections with almost a 90 percent turnout. The August 10 Presidential election was also remarkable according to Davutoğlu, who said that it was the first time a Turkish president was directly elected by popular vote. He congratulated the Turkish people for their participation in the elections and for having a democratic conscience and determination to ensure that Turkey is not pulled into chaos, while stating that he has no doubt that the people will express the same determination in the upcoming general elections which are expected to take place in June 2015.

The prime minister said that Turkey's determination to protect its democracy indicates that it has become a country of peace and stability despite the crises surrounding the country in its neighbors. "The only thing that Turkey wants to see in the Balkans, Central Asia, Middle East and the Mediterranean is peace and stability" he said, emphasizing that Turkey is no longer a country that is struck by domestic economic crises and depressions, but is a country which tries to aid international crises in other countries with its established development apparatus and vision and confidence.

With regards to the reconciliation process, Davutoğlu stated that the government sees it as the assurance for securing national unity and brotherhood and noted that they will not make any concessions to appease anyone. He highlighted that public order is an inseparable part of the process which will be guaranteed by the domestic security reform package which was submitted to the parliament on November 24.

"2015 will hopefully be a year for us to carry out the second stage of our development move and implement the government's 2023 goals for a brighter future" Davutoğlu was quoted as saying.