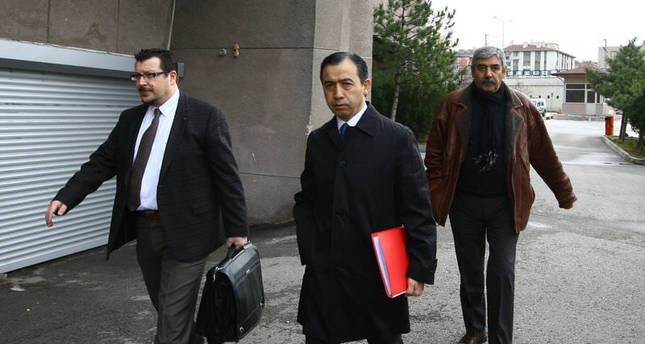 The interim decision in the first hearing as part of a probe into members of the Gülen Movement in the Prime Ministry, who placed a bug into then Prime Minister Recep Tayyip Erdoğan's office, has been given. Erdoğan, now president, and Prime Minister Ahmet Davutoğlu's demand to intervene in the trial have been accepted and the defendants' request for acquittal was declined.

The first hearing for the case on the illegal wiretapping of Erdoğan's office started on January 2. While five suspects who are sought by police are still at large, eight of them appeared before the court. One of the suspects is former director of the country's scientific watchdog, the Scientific and Technological Research Council of Turkey (TÜBİTAK).

The suspects stood trial on charges of "political and military spying." Prosecutors will seek a sentence of 15 to 20 years for the suspects in accordance with article 328 of the Turkish Penal Code.

The public prosecutor from the Bureau of Investigation into Crimes against Constitutional Order, Durak Çetin, completed the bill of indictment and sent it to the Ankara 11th High Criminal Court on November 18.

Erdoğan revealed in late 2012 that a listening device had been found in his office and charges of political spying were brought against 13 suspects.

Çetin demanded they be sentenced to prison for a period of 21 to 36 years. In addition, the Ankara Seventh High Criminal Court also issued an arrest warrant for the five suspects, with the first session of the case to be held on January 25, court sources said. To date, hundreds of police officers have been detained and have testified in the probe.

Suspects are accused of eavesdropping on Turkey's top officials and of disclosing information of a highly sensitive nature, as well as "forming an organization to commit crime and being a member of this organization," "violating privacy," "illegally seizing personal information" and "forgery of official documents."

The Turkish government, blaming the Gülen Movement, led by U.S.-based retired imam Fethullah Gülen, for the wiretapping, also accuses the network of attempting to infiltrate the Turkish state and of plotting to overthrow the government.