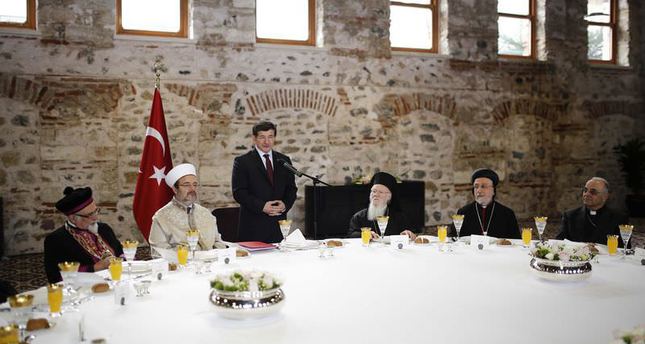 by Nurbanu Kızıl Jan 02, 2015 12:00 am
Prime Minister Ahmet Davutoğlu has said that the government embraces all citizens regardless of their background and is proud of the country's diversity. He made the statements at the first official meeting of 2015 on Friday at a luncheon with representatives of non-Muslim communities in Turkey as part of a project to raise awareness about Islamophobia.

Davutoğlu also drew attention to the rising Islamophobia and urged everyone to take action and raise awareness. "Raising your voice against Islamophobia means standing up against discrimination for all faiths" he said.

The meeting came after the recent National Security Council highlighted that racism and discrimination against Muslims and Islamophobia is on the rise in Europe and the situation is alarming.

As part of the efforts to take action against the situation, the meeting is expected to bring different religious leaders together to emphasize the idea that Islamophobia and racism are unacceptable and contrary to the teachings of all religions. Community leaders are expected to express a common stance against Islamophobia and mosque attacks in Europe, while they will convey messages against terrorism and discuss the issue of the self-proclaimed Islamic State of Iraq and al-Sham (ISIS) in the region.

Representatives from Turkey's different religious communities will also discuss the developments and current state of events in Turkey as well as in the world.

Greek Patriarch Bartholomew I; Aram Ateşyan, the Armenian Pontiff of Armenians in Turkey; Ishak Haleva, the Chief Rabbi of Turkey; Levon Zekiyan, the Armenian-Catholic Archbishop in Turkey and a number of representatives from the Latin Catholic community, Assyrian Orthodox communities and others are expected to be present at the meeting.

The President of Turkey's Presidency of Religious Affairs and some ministers will also participate and discuss issues with representatives of religious communities in Turkey.

As part of democratization efforts, the Turkish government has carried out a number of reforms to improve the rights and freedoms of minorities in the country. A new sense of all-encompassing identity is being encouraged by the government, which accepts all citizens regardless of ethnic or religious background.

The government has lifted a number of legal obstacles faced by foundations (vakıfs) of non-Muslim communities which prevented them from owning real property. This has resulted in the return of significant monuments such as the Mor Gabriel Monastery in Mardin to the Syriac community. The Greek community was also given permission to reopen Aya Todori elementary school in Gökçeada, while the Sümela Monastery in the city of Trabzon along the Black Sea and the Akdamar Church in the eastern city of Van, - both of which functioned as museums- were reopened for religious services. The Armenian community was also given permission to build a school for the first time since the establishment of the Turkish Republic.