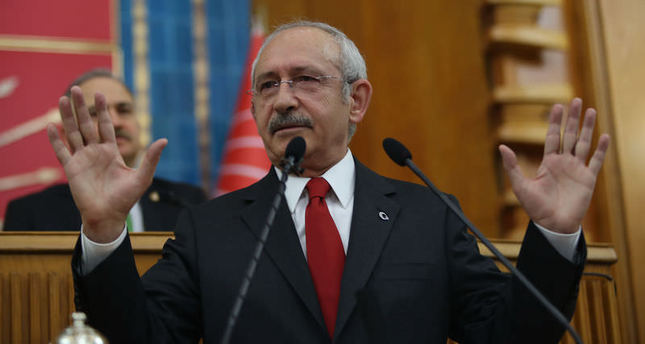 by daily sabah
Jan 06, 2015 12:00 am
Allegations have emerged from the main opposition Republican People's Party (CHP) and continue to occupy the Turkish political agenda. Turkish daily Takvim claimed yesterday that CHP Chairman Kemal Kılıçdaroğlu asked the CHP's Istanbul mayors to give money to enhance a pro-CHP television channel, +1, but the money gathered from CHP mayors was never invested in the channel.

The allegations come amid a mayoral conflict in the party. While the main opposition is dealing with the conflict between Hayri İnönü, the mayor of Istanbul's Şişli district, which is a fortress of CHP voting, and Mustafa Sarıgül, who served the district as mayor for many years and allegedly attempted to hold on to his influence over the municipality. Even though the issue between İnönü and Sarıgül has been brought to trial, new allegations shook CHP municipalities in Istanbul.

Reportedly, CHP Vice Chairman and Istanbul Deputy Erdoğan Toprak was the mastermind behind the idea of boosting the channel. Convening under Kılıçdaroğlu's chairmanship, the CHP mayors met in a hotel convention center in Istanbul. Apart from the Istanbul municipalities of Adalar and Çatalca, all municipalities gave funds in accordance with their incomes.

In Istanbul's renowned CHP districts of Sarıyer and Ataşehir, the mayors gave TL 2 million ($860,000), and Beşiktaş, Kadıköy and Bakırköy mayors gave TL 500,000, but the money was never invested in the channel and the members have no idea where the money went. Allegedly, the money was given to Toprak in his office in Istanbul's Maslak neighborhood to increase the effectiveness of the +1 TV channel and to use the channel in the CHP's bid to reclaim power.

The daily asserted that CHP Istanbul deputies, including Umut Oran and Bihlun Tamaylıgil, former CHP Istanbul provincial head Oğuz Kaan Salıcı, who resigned from his post in December, attended the "secret" meeting. CHP Vice Chairman Gürsel Tekin, who made an appearance later during the meeting, opposed the gathering of that number of CHP members at such a secret meeting, but Kılıçdaroğlu ignored his warnings.

The daily called some of the CHP members who were mentioned in the allegations and CHP Maltepe Mayor Mustafa Zengin told Takvim that no one asked him for money directly and he was the only one that the CHP could not manage to get money from.

"… because I can't. I do not have that power. They tried to ask for money indirectly for the TV channel," Zengin said.

Denying the allegations, Toprak said that some people who were not elected candidates for the CHP tried to get revenge.

"All of these allegations are lies. There is no such thing," he said.

Oran, who also served as CHP vice chair, asserted that he did not remember such a meeting and added: "We had meetings with CHP mayors for different purposes and I attended most of them. However I don't remember a meeting to develop the +1 TV channel. I really don't."

The daily also called Salıcı many times to ask his opinion of the allegations, but he did not respond to the calls.