President: success should be priority of universities and students 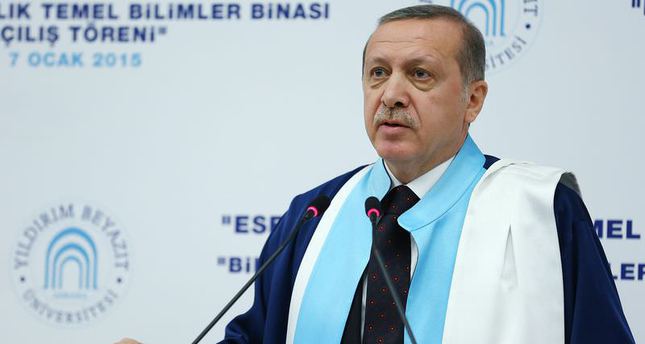 by Nurbanu Kızıl Jan 07, 2015 12:00 am
President Recep Tayyip Erdoğan has said that Turkish universities have witnessed an era of tutelage in the past and many students have been disadvantaged by various restrictions. He made the statements on Wednesday as he addressed the audience at the opening of a new campus building for Yıldırım Beyazıt University in Ankara.

"Universities have been used as a means to brainwash students to think in a certain way" said Erdoğan, noting that there were times when academics supported coups and authoritarian principles promoted by coups. He noted that universities which should solely be educational institutions to academically develop the minds of students have formatted their minds.

"We want to see university students that will elevate Turkey with their academic achievements, not throw Molotov cocktails" the president said.
Erdoğan also touched upon the unfair structure of the UN Security Council and argued more countries from across the world should be represented. "The permanent members only represent Europe, America, and Asia," Erdoğan said, noting that there is no country representing the world's Muslim population. "The fate of all other countries across the world cannot depend on what the current permanent members will say," the president said, suggesting a rotating permanent membership for the Security Council where different countries throughout the world could take turns to ensure equal representation for all.