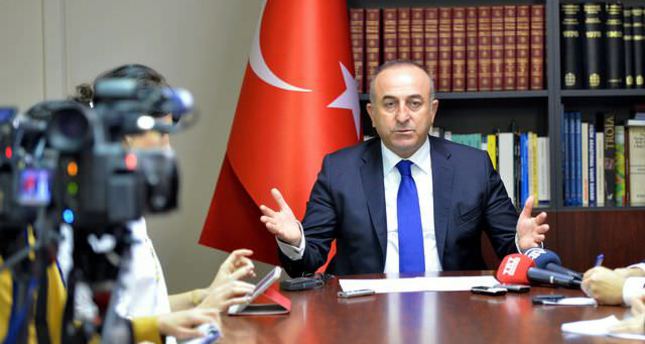 by Daily Sabah Jan 07, 2015 12:00 am
Wednesday's deadly shooting at French satirical weekly Charlie Hebdo sparked international criticism from Turkey, Europe and the U.S. calling it "an act of terror and an attack on free speech."

He wrote on Twitter: "I condemn the terrorist attack in France. Unity in the fight against all sorts of radicalism and terrorism is a must all over the world."

"I called Laurent Bili, Ambassador of France, to convey my heartfelt condolences for the tragic loss of lives at the terrorist attack in Paris."

Turkey's Foreign Ministry also released a statement, saying the attack was an "assault on humanity and universal values".

The head of the Turkish-French Friendship association, Kasım Gürpınar, said: "[The Paris shooting] is an unprecedented incident … A French minister said that the country faced a major terrorism threat. The shooting seems to be well-planned. These kinds of attacks are not often encountered in a country like France."

"I reject any equation of Islam and this cowardly attack," Culture and Tourism Minister Ömer Çelik said, "This attack will reinforce the negative perception of foreigners and Muslims in a climate in Europe of growing Islamophobia and racism."

UN Secretary General Ban Ki-moon condemned the attack on Charlie Hebdo, branding it an assault on the media and freedom of expression.

"It was a horrendous, unjustifiable and cold-blooded crime. It was also a direct assault on a cornerstone of democracy, on the media and on freedom of expression," Ban told reporters at UN headquarters.

The U.S. also condemned the attack and offered to help French officials in the pursuit of the terrorists responsible for the massacre. "The United States stands ready to work closely with the French," White House spokesman Josh Earnest said, speaking on MSNBC.

"This is an attack on the basic freedoms of speech and freedom of the press," Earnest added.

"France and the great city of Paris where this outrageous attack took place, offers the world a timeless example that will endure well beyond the hateful vision of these killers," U.S. President Barack Obama said.

European Commission President Jean-Claude Juncker called it an "intolerable act, an act of barbarism which challenges all as humans and Europeans," in a statement issued by EU.