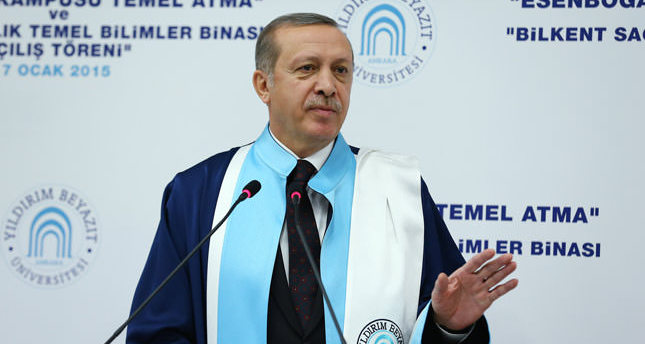 by Sena Alkan Jan 08, 2015 12:00 am
President Recep Tayyip Erdoğan in a speech at a groundbreaking ceremony yesterday in Ankara, criticized the current structure of the U.N. Security Council (UNSC) and reiterated his previous statement that "the world is bigger than five," in reference to the five permanent members on the council. "I say the world is bigger than five," Erdoğan said, expressing his displeasure of the fact that no decision can be made at the UNSC without the approval of its five permanent members.

Erdoğan often criticizes the UNSC, about which he says the Muslim world's roughly 1.5 billion people have no representative. "You have no right to put the future of 195 other countries in the world under the decision coming from one of the five permanent members of the UNSC," he said, adding that since only these permanent members have authority, the world has been onlookers alone at the death of 350,000 people during the Syrian civil war.

Offering an alternative to the current UNSC structure, Erdoğan said that the number of non-permanent members could increase to 15 or 20 and these members could be changed each year or biannually. He continued to detail his alternative: "Religious institutions and continental representation should also be taken into account while changing the 20 non-permanent members."

"Only three continents are represented now. When you consider the religious situation [at the UNSC], there is not one single Muslim country. Then what is the function of the UNSC? Turkey is not represented there," he said, and added that the assembly has no right to speak for Turkey.

Turkey has previously been a non-permanent member of the UNSC in 1951-1952 and 1954-1955 as well as 2009-2010 when it was elected with a resounding 151 votes. Last year in September, Turkey once again competed for non-permanent member status on the council. Competing with Spain and New Zealand, Turkey lost to Spain in the third round of voting. Other seats on the council were won by Angola, Malaysia and Venezuela with no competition with other states.

Touching on the ongoing chaos in troubled Syria and Iraq, Erdoğan reiterated that thousands of people have lost their lives, but the only intervention by Western countries came from the air and they did not put boots on the ground. He said that the anti-ISIS coalition led by the U.S. did not accept carrying out ground operation against the self-proclaimed Islamic State of Iraq and al-Sham (ISIS) and added: "Then we said if you do not accept a ground operation, support the Free Syrian Army [FSA]. But, they did not."

Saying that the anti-ISIS coalition put its support in the PKK's Syrian wing Democratic Union Party (PYD) in the northern Syrian town of Kobani, Erdoğan claimed this move would only pave the way for a state to be established by terrorist organizations. Most of the fighters battling ISIS in Kobani are members of the PYD's People's Protection Units (YPG). For that reason, Turkey has some reservations about the U.S., which has taken the PYD off of its terrorist list, resupplying the YPG in Syria.

Ankara has been strongly against supporting what it sees as a terrorist organization, given that the weapons provided to the organization, under certain circumstances, could be used later against Turkey. Assessing the risk, Ankara began seeking alternative ways to contribute to the anti-ISIS coalition such as proposing that the U.S. administration officially support recognized armies like the peshmerga and FSA instead of the YPG.

Turkey, the U.S. and EU consider the PKK a terrorist organization. It took up arms against the Turkish state in the 1980s in order to carve out an independent Kurdistan in southeastern Turkey. Ankara does not differentiate between the Syrian Kurdish PYD, the YPG or PKK, and considers the PYD to be a terrorist organization as well.