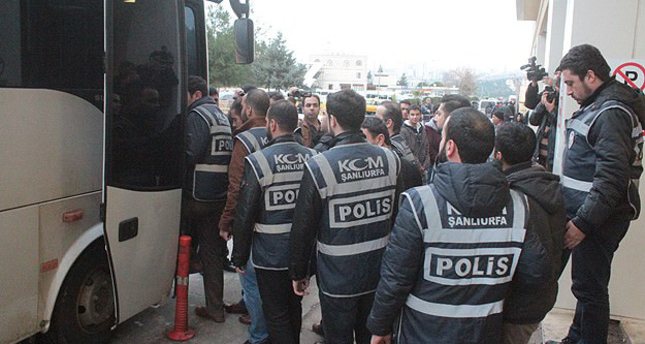 by Daily Sabah Jan 08, 2015 12:00 am
Three police officers allegedly affiliated with the Gülen Movement have been arrested after being referred to court on wiretapping charges in Şanlıurfa.

A total of 14 police officers allegedly linked to the movement, which is accused of orchestrating the Dec. 17 and Dec. 25 operations in an attempt to topple the government, were detained as part of an investigation into illegal wiretapping conducted by the Şanlıurfa Public Prosecutor's office.

A simultaneous operation was launched in 11 different provinces to investigate and apprehend the suspects charged with "violating the privacy of communication," "recording personal data," "fraud in official documents," "fabricating crime," "establishing, chairing and being a member of a criminal organization" and "misusing the means of the state."

After their statements were recorded, 14 suspects, including police chiefs and commissioners, were referred to a court with a demand for their arrest. Police chiefs, Harun T., Fuat A. and chief inspector Kaan Ö., were among the detainees who were arrested. The remaining detainees were released pending trial.

The Turkish government blames the Gülen Movement for wiretapping and also accuses the network of attempting to infiltrate the Turkish state and of plotting to overthrow the government.

The Gülen Movement is seen as a national threat by the government, as the movement is accused of wiretapping thousands of people, including Turkish government officials, encrypting phones and allegedly infiltrating state institutions with the aim of overthrowing the government. The movement is led by Fethullah Gülen who lives in self-imposed exile in the U.S.