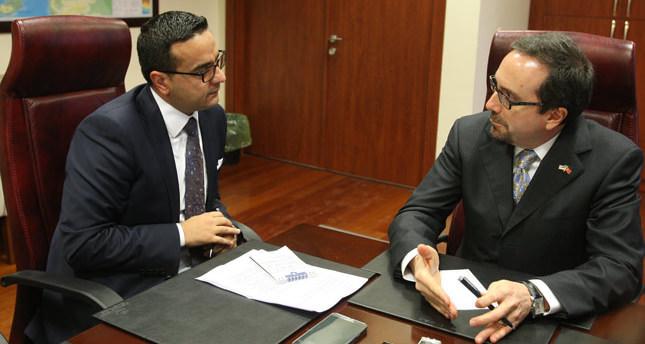 U.S. Ambassador John Bass said they took all extradition requests seriously, remarking that his country believed the judicial process initiated should be respected

John Bass, the U.S. ambassador to Turkey, in an interview with Daily Sabah, was noncommittal about how the extradition of Fethullah Gülen to Turkey would proceed, but explained that they are following the matter closely, knowing that the charges laid against Gülen and the Gülen Movement, which he leads, were grave. Bass, who was confirmed as ambassador by the U.S. Senate last September, drew attention to the fact that extradition is a long and time-consuming process. Gülen, who currently resides in Pennsylvania, and his movement, are accused of attempting to topple the elected government through operatives in state institutions. Gülen and his movement has become a prominent topic for Ankara, especially after the arrest warrant recently issued by an Istanbul court. "… it is quite clear to us, obviously, as observers of Turkish society and Turkish politics, that there is a very serious set of allegations and charges against a set of individuals some of whom were in the Turkish government, some of whom were outside of the Turkish government, concerning activities that, according to the allegations, were designed to undermine the Turkish state," Bass said.

However, he said: "With respect to any legal proceedings against Mr. Gülen, what I can say is that we take all extradition requests from foreign governments with whom we have the appropriate legal arrangements very seriously, and we evaluate them very carefully to determine whether the case that is presented to us, and the basis under which a foreign government is requesting extradition, matches up against U.S. law, and whether we see violations of U.S. law within the presentation that we receive. As a matter of long-standing policy, we do not comment on individual extradition cases or hypothetical extradition cases as they apply to individuals. Thus, I am unable to provide you with any more specifics with respect to a possible or an actual proceeding that could be underway."

Referring to the legal process that has begun against Fethullah Gülen and other related legal cases against members of the Gülen Movement who were allegedly involved in illegal wiretapping, tapping encrypted phones and infiltrating state institutions with the aim of toppling the government, Bass said that these allegations and charges are part of a Turkish law enforcement and judicial process and therefore, it should be respected. "We very much respect the process, and due to this respect we believe that from our perspective, a Turkish process should be involving Turkish citizens in the Turkish judicial system," he added.

Bass continued by emphasizing: "I would just say we believe that it is important that the process moves forward in a fair and transparent status, so that the results of that process could generate confidence among the Turkish public that it is a good, honest, effective judicial process and that overall, in addition to people having confidence in the outcome, they also have additional confidence in the judiciary and judicial system," he said.

The ongoing crisis in Syria, caused by the Islamic State of Iraq and al-Sham (ISIS), which has seized large swathes of territory in Syria and around one third of Iraq, and the regime of President Bashar Assad of Syria, which has committed massacres since the civil war began in 2011, is worsening each day. Although Turkey and the U.S. do not fully agree on how to resolve the crisis in Syria, Bass said both countries agree on a majority of the perspectives.

Describing U.S.-Turkey relations as a strong, deep and enduring strategic partnership, Bass said that there are some areas that are seen differently. However, he underlined that they are going to continue this year to work on those areas to see if they can narrow the differences or at least better understand why the two countries have these differences.

Stressing that the relationship between Turkey and the U.S. is multidimensional, Bass said that there is a wide range of areas where both countries continue to cooperate very closely. "The Turkish Parliament's decision to support deployment of Turkish troops to the training mission in Afghanistan [is] the latest example of where Turkey is making a really important contribution to a shared priority between the United States and Turkey and with our other NATO allies. Turkey's support for the Somali government and our common efforts to address the instability in the Horn of Africa and the ongoing threats from piracy in the waters of the Horn of Africa is another great example, as is Turkey's ongoing willingness to train, in the future, general forces for future Libyan armed forces. So these are just some of the ways in which we are working to address problems that threaten us from outside the immediate geography of our traditional alliance, to try to get at them in places where they currently exist to ensure that they do not become greater threats that we have to address in the future," he said.

Regarding remarks on tactical disagreements between the two countries, Bass said that the U.S and Turkey had some differences of opinion over the developments in Syria and Iraq. "We currently, I think, have some differences of view about the best way to look at a set of complex, interlocking problems in Syria and Iraq – where from our perspective, we believe that DAESH poses the most acute threat to the stability of Iraq and, by extension, the broader context for the conflict in Syria. And we think that, and are acting accordingly, to try to address that most acute threat as we see it," he said using the Arabic acronym for ISIS.

Nevertheless, Bass underlined that both countries have much common perspective on the crisis in Syria: "Both governments believe that there is, in the long term, not going to be a military solution to this conflict. Both governments are committed to a diplomatic process that achieves a political settlement on the basis of the Geneva Communique and those fundamental principles. Both governments are working very hard with the Syrian opposition to continue to develop its capacity, to conduct the negotiations when they occur, to realize that settlement based on those principles and both governments are continuing to provide a wide range of support to Syrian opposition groups inside Syria who are defending themselves against attacks from the Assad regime and defending their villages and homes and to enable them to continue to make progress on the battlefield in order to get us to a political negotiation for settlement."

It was recently announced that Turkey is expected to sign a memorandum of understanding with the U.S on the training and equipping program for Syrian opposition forces in January. Touching upon this issue, Bass said that there is ongoing work: "We are continuing to work out the practical details of how we are going to conduct this training, and how we are going to go about equipping these elements that we train so that the net result at the end of this process is a capable force that has an impact on the ground in Syria. Obviously, there are a lot of details involved in that process from the starting point of identifying the right people to train and then going through a training process, and then ensuring that that cohort that is trained is capable of defending itself and capable of having an impact on the battlefield in Syria. I am confident we are going to work through the remaining details we have, which are primarily conversations between military professionals who are going to be conducting the training on a timeframe that is going to enable us to get started in the near future. I cannot predict a particular date because it is a pretty complex process. And with respect to details about the program, I think we will have to wait until we are actually started before we are going to be in a position to provide you with some of that granularity, if you will."

Addressing the creation of a no-fly zone, or safe zone inside Syria, Bass said that negotiations on this issue are still in progress: "From our perspective, it is very important to understand to a really fine degree of detail conceptually, what these concepts mean and how they would be applied, and then to think about how they would potentially contribute to changing the situation on the ground. At this point, I would say that we are continuing to have those conversations with the Turkish government in order to better understand this broad set of possibilities."

He said the current U.S.-led coalition's airstrikes against ISIS could only be a component in the effort to reduce ISIS's ability to maneuver, to concentrate forces in specific areas and to expand the geography that it controls. Bass referred to ISIS with its Arabic acronym, DAESH, which President Recep Tayyip Erdoğan also prefers. He said, "It has never been our expectation, and I think if you go back and look at the comments from any range of American senior military and political officials, you will not find someone saying that airstrikes will solve this problem. What you will find is people saying that air strikes are and have been an important first step in reducing DAESH's capacity and its ability to continue to expand and maintain control over the territory it's had. So airstrikes are only one piece of what we are doing. And we continue to work closely with all of our coalition partners including the government of Turkey to work on all of the efforts to address this problem."

Bass defined the Kurdish reconciliation process as, fundamentally, a domestic process, and stated their support for it. Regarding the allegations of U.S. involvement in the process as a third party, he said that they have not received any kind of request. He also pointed out that the PKK is still on the designated terrorist organizations list of the U.S and they have no plans to reconsider their designation of the group.

Touching on the situation in Ukraine, Bass said that Russia's annexation of Crimea was a disturbing event: "We have been so disturbed by Russia's illegal annexation of Crimea and by its behavior in eastern Ukraine, and that is why we have imposed along with the European Union some fairly strong sanctions against sectors in Russia and individuals in Russia, who are responsible for a lot of this behavior. We very much hope that we will see full implementation of the Minsk Agreement, even while we continue to call on the Russian government to end its illegal annexation of Crimea." On the issue of Ukraine's possible application for NATO membership, he said all states in Europe should have the freedom to choose their own futures and an important part of that is to choose the types of relationships they want. He also described the freedom for countries to choose their own futures as a fundamental tenant of their policy since the end of the Cold War.