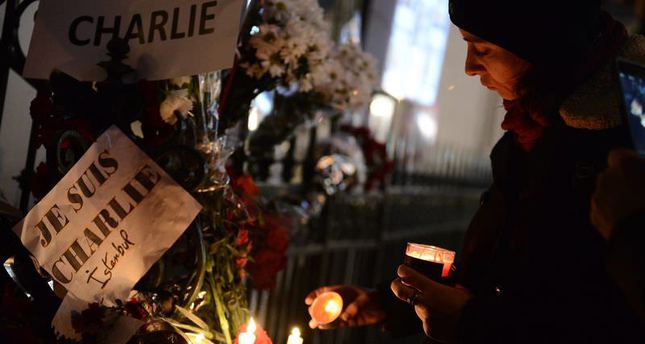 From top political and religious leaders to ordinary civilians, Turkish people stand in solidarity with the French and condemned the attack on Charlie Hebdo that killed 12 people

Following the deadly attack on the French satirical magazine Charlie Hebdo on Wednesday in Paris that claimed 12 lives, Turkey strongly condemned the perpetrators of the attack and called for cooperation against all forms of terrorism.

A group of people yesterday gathered in front of Istanbul's French Consulate with posters reading, "Je suis Charlie" – "I am Charlie" in French – to protest the terrorist attack on the satirical magazine and to show they stood in solidarity with the French people.

President Recep Tayyip Erdoğan on Wednesday said in a written statement that Turkey strongly condemned the heinous attack on the Charlie Hebdo offices and he extended his condolences to France, which he called a friend and ally to Turkey. Erdoğan also said that the perpetrators of the attack should be brought to justice as soon as possible.

Highlighting that terrorism has no religion or nationality, he said: "It is of the utmost significance that we have a mutual stance against terrorist attacks such as the last one that happened in Paris. We have to take a firm stance against hate speech and intolerance."

He added that Turkey will determinedly continue to combat terrorism.

Prime Minister Ahmet Davutoğlu strongly condemned the attack as well: "Globally, we must act against today's attack in Paris so that tension does not spread to other areas."

Davutoğlu also said: "Attempts to relate Islam to the terrorist attack would be wrong," and added, "Islam is a religion of peace."

Foreign Minister Mevlüt Çavuşoğlu condemned the attack as well: "We as Turkey condemn terrorism in all forms. It does not matter where it comes from; we oppose all acts of terrorism. We need to fight against terrorism. There are two factors that need to be fought in our region and Europe as well – regional and global terrorism. There is a serious global shortcoming in counterterrorism."

Turkey's EU Minister Volkan Bozkır condemned the attack on Twitter: "I condemn the terrorist attack in France. Unity in the fight against all sorts of radicalism and terrorism is a must all over the world."

Turkey's head of the Presidency of Religious Affairs, Mehmet Görmez, who strongly condemned the attack, said that the massacre in Paris perpetrated by using the name of Islam and Prophet Muhammad with a desire for revenge is an open attack to eliminate the noble values that Prophet Muhammad gave to humanity.

Görmez also said that to use Islamic signs openly while carrying out attacks is a perception operation, and added, "Each statement made to connect the attack with Islam has the effect to yield same negative and devastating results."

The Charlie Hebdo attack should be regarded as an isolated terrorist incident and nothing more, Turkey's Ambassador to Paris, Hakkı Akil, has said. Speaking to reporters during the 7th Annual Ambassadors' Conference in Ankara on Thursday, Akil also said there was no need to tighten security measures at the Turkish Embassy in Paris, as "it is being highly protected 24/7".

"We don't need to have extra security measures because of the shooting, because our embassy is one of the best-protected around," Akil said. When asked if there were threats against Turkish people in Paris, Akil said he did not foresee any particular problems for Turkish citizens in the French capital. "The Turkish community in Paris is a highly respected and a common-sensical community," he added.

Twelve people were killed and 20 wounded in a shooting at the Paris offices of French satirical magazine Charlie Hebdo on Wednesday. Editor-in-chief and cartoonist Stephane Charbonnier, known as Charb; and the cartoonists Jean Cabut, known as Cabu; Bernard Verlhac, known as Tignous, George Wolinski and Philippe Honore were killed in the attack along with economist and journalist Bernard Maris, columnist Elsa Cayat, subeditor Mustapha Ourrad and former journalist Michel Renaud.

Two policemen, Ahmed Merabet and Frank Brinsolaro, were among the dead, having been killed during the exchange of gunshots in the street outside the office while the attackers escaped. Frederic Boisseau, a maintenance worker, was also killed in the attack.

Charlie Hebdo had issued satirical caricatures of a wide range of religious figures including the Prophet Muhammad and Muslim leaders in 2006 and 2012, which the magazine presented as "freedom of expression," sparking anger in the Muslim world.