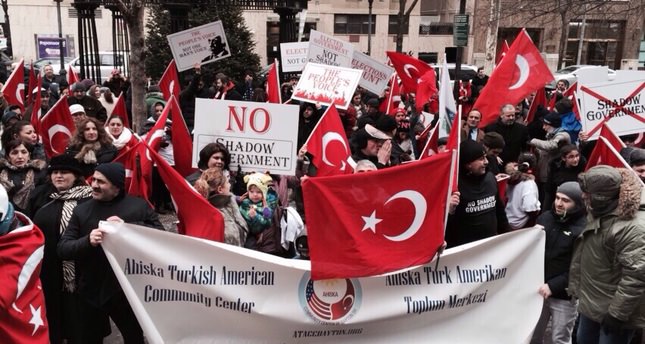 by Daily Sabah Jan 11, 2015 12:00 am
Hundreds of people from New York's Turkish, Arab and Bosnian communities rallied Sunday to protest the activities of the movement led by Pennsylvania-based controversial imam Fethullah Gülen, whose followers are accused of plotting to seize power in Turkey.

As many as 300 protesters gathered in front of the Dag Hammarskjold Plaza at the junction of 47th St. and 2nd Avenue despite cold weather, waving Turkish and American flags and carrying placards reading "The People's Voice, Not One Person's Voice" and "Stop Using U.S. Taxpayers' Money to Fund Your Coup."

The Gülen Movement is accused of forming a criminal gang – popularly referred to as the "parallel state"–- within Turkey's key institutions including the judiciary and the police. The movement runs a vast network of for-profit educational institutions in the U.S. and across the world.

The Turkish government accuses Gülen supporters of lobbying unspecified foreign elements to topple President Recep Tayyip Erdoğan's administration, and of being behind online leaks of spying and phone hacking on high-ranking officials.

Ashraf Ismail from Egypt said they were at the rally to show their gratitude to the Turkish government for "the way it deals with the human rights issues in Egypt."

Rıza Ateş, 30, said he attended the rally to support Turkey and protest against "those who are trying to block the rise of the Turkish Republic."

The rally was organized by Turkish community organizations in the U.S. They have issued a statement saying that the protest was organized as a response to the Gülen Movement's disinformation campaign about Turkey, which aims to damage relations between the two countries. "Their defamation campaigns also negatively affect the Muslim communities in the U.S. and disturb our Turkish communities," the statement read, noting that they aim to raise awareness about the illegal activities of the movement including unlawful immigration practices and abuse of taxpayer money. 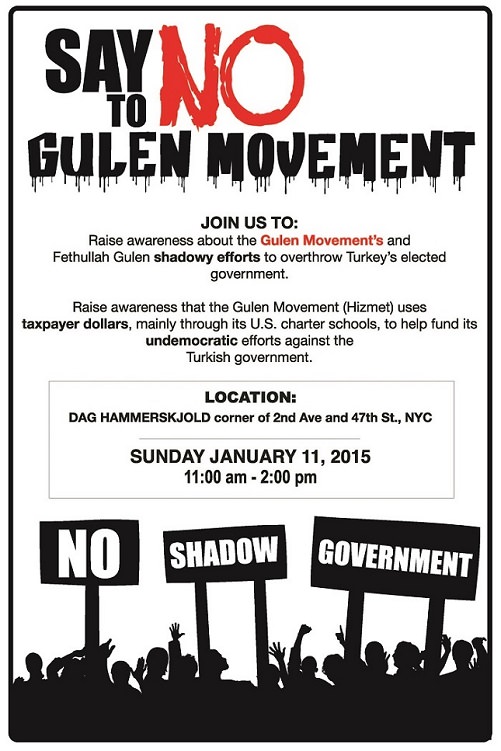