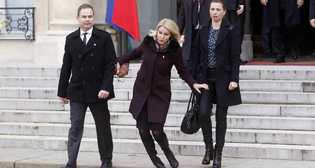 
Following a moving tribute in Paris, Danish Prime Minister Helle Thorning-Schmidt was knocked off her feet. The blonde 48-year-old political leader was caught on video tumbling down the steps of the Elysee Palace Sunday while wearing a long purple coat and black heeled boots.

The video shows her walking down the steps perfectly fine but then losing her balance as she heads towards the bottom. She appeared to be OK as she was helped back up to her feet.

More than 55 leaders from around the world arrived in Paris to join hundreds of thousands of people in a symbolic unity march to pay tribute to victims of deadly attacks in France that left 17 people dead.