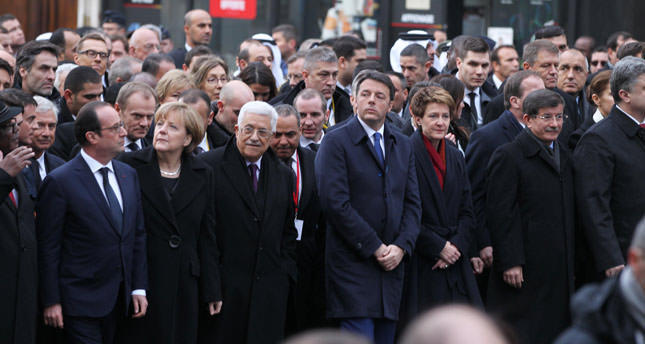 by Mehmet Solmaz Jan 11, 2015 12:00 am
Prime Minister Ahmet Davutoğlu arrived in France Sunday to participate in a unity rally in Paris being held in solidarity for the victims of recent deadly attacks in the country.

More than 55 leaders from around the world arrived in Paris to join hundreds of thousands of people in a symbolic unity march to pay tribute to victims of deadly attacks in France that left 17 people dead. On his official Twitter account, Davutoğlu wrote a post in French: "I am in Paris in solidarity with the French people against terrorism." The prime minister said Turkey's participation at the unity rally in Paris would give a strong message to groups that want to blame the recent attacks in France on the Islamic world.

Addressing a press conference before he left for France to join the rally, Davutoğlu said, "Our participation in the Paris march is a strong message for groups that want to blame the Islamic world, especially Muslims who live in Europe."

The premier added that Turkey's participation would "give a strong message to those who may want to launch a campaign against Muslims by exploiting the Paris attack."

More than a million people gathered in central Paris as part of the "Republican march." Before heading out for the unity march rally, French President Francois Hollande spoke at the Elysee Palace where he received several international and French leaders. "Paris is the capital of the world today," Hollande said. Earlier, Foreign Minister Laurent Fabius said, "This afternoon Paris is the world capital of the resistance against terrorism and the defense of freedoms; the march will truly be a global march of freedom."

Amid increasing Islamophobia and racism in Germany where nearly 3 million German Turks reside, Davutoğlu was scheduled to head to Germany after his Paris visit on Sunday. The visit is interpreted as a move to settle down increasing anger against Muslims and immigrants in Germany, which boiled over with the Patriotic Europeans Against the Islamization of the West (PEGIDA) demonstrations that started in Germany's eastern city of Dresden, which have been inflamed by the massacre at the French satirical magazine Charlie Hebdo on Wednesday in Paris. Davutoğlu is expected to refer to the EU's claims to defend freedom of belief, thought and human rights and to warn Germany and other EU countries of growing Islamophobia in Europe.

The Turkish government recently released a statement for German Turks saying that Turkish citizens in cities experiencing increased anti-Muslim and anti-immigrant demonstrations should not be provoked by extremist actions and hate speech.