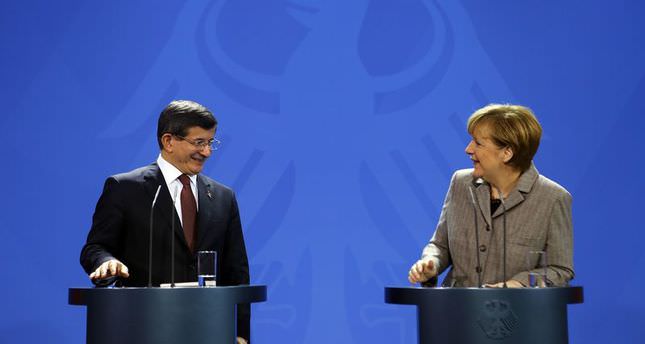 by Nurbanu Kızıl Jan 12, 2015 12:00 am
Prime Minister Ahmet Davutoğlu has said that it is not right to relate terrorism with religion and underscored that putting a label on terrorism allows people to exploit it.

Speaking at a joint press conference held with German Chancellor Angela Merkel in Berlin on Monday, he urged everyone to refrain from associating terrorist organizations with any religion. Leaders from both countries have stated that they share the same stance in response to terrorism and Islamophobic attacks in Europe.

"Following the terrorist shooting in Norway in 2011, we never thought of this as 'European terrorism' or 'Christian terrorism,' nor have we identified racist attacks against Turks in Germany as 'German' or 'Christian' terror," Davutoğlu emphasized.

Stressing that there are over 3 million Turkish people living in Germany, Davutoğlu described these people as serving as a bridge between the two countries, and said that Turkey and Germany should take joint action against Islamophobic attacks at mosques and Muslims.

In response to a question about Turkey's EU accession, Davutoğlu said that Turkey is part of Europe and that Turkey's Asian identity would not threaten its European identity, but would "add color to it."

Davutoğlu highlighted that Turkey takes great effort to protect its 911-kilometer-long border. "We support every kind of intelligence not to accept foreign fighters" he said, adding that Turkey hosts 35 million tourists every year and only prohibits entry to individuals when it receives intelligence from the relevant country that they should not be admitted to the country. He explained that Turkey has deported 1,500-2,000 people and put restrictions on a further 7,000 people from entering the country in order to prevent terrorism.

The prime minister also said that he was proud to be a part of the unity rally in Paris on Sunday, in which he walked side-by-side with others to commemorate the victims of the Paris attacks. He added that Turkey expects the same kind of sensitivity from Europe when there is terrorist activity in Turkey.

During the question and answer session, Merkel said that Islam is part of Germany and everyone who respects German law is respected by the country. She emphasized that as chancellor, she represents everyone in Germany, regardless of their ethnic, national or religious backgrounds and identities.

"We have many deputies who are originally from Turkey and we should also support interfaith dialogue among different religions," Merkel said, adding that it is important for Muslims to express a solid stance against terrorism.

Merkel said she will join a rally for an "open and tolerant Germany," called by Muslim leaders on Tuesday in Berlin, alongside participating German ministers.

The two leaders also addressed the issue of Iraq during the conference. "Turkey and Germany have similar ideas about the newly formed government in Iraq," Merkel said, and added that Turkey is exerting great efforts to host Syrian refugees.