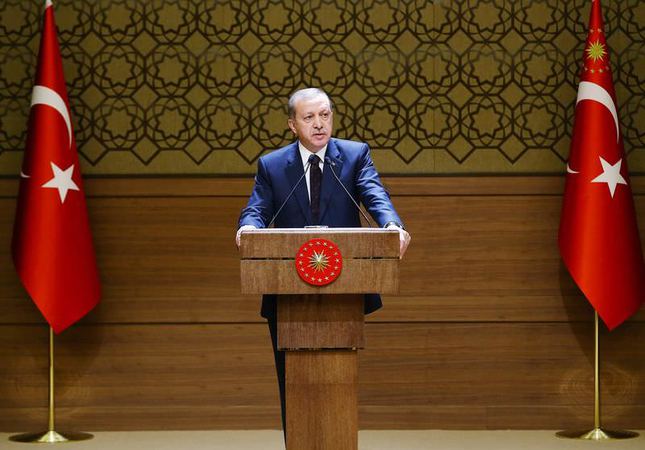 by Merve Aydoğan Jan 16, 2015 12:00 am
The ongoing discussions on President Recep Tayyip Erdoğan chairing the upcoming Cabinet meeting on January 15 have been finalized. Following his announcement, a recently-conducted survey by Ankara-based MAK Consultancy, showed that 70.5 percent of Turkish citizens are in favor of Erdoğan's leadership at Cabinet meetings.

In a public opinion survey conducted by MAK Consultancy between January 5 and January 10, 70.5 percent of Turkish citizens expressed full support for Erdoğan chairing the upcoming Cabinet meeting. The results from the poll are highly significant not only due to the portrayal of a little less than a quarter of Turkish citizens' absolute support and trust in Erdoğan, but also as an important indicator of the country's possible shift in the political system to a presidential system from a parliamentary one.

Additionally, another public survey recently conducted in 2015 by the Istanbul-based A&G research company reported that "Turkish citizens still say they will vote for President Erdoğan." A&G's results also indicated that the results from 2011 have not changed much, and Erdoğan and the ruling Justice and Development Party (AK Party) still remain strong contenders for the elections.

In the survey by MAK Consultancy, 5,400 citizens in 30 municipalities, 20 provinces and 140 districts were polled. The comprehensive survey addressed three main topics, including the upcoming general elections, the reconciliation process and unemployment. While there is almost five months left until the general elections, the recent polls appear to show a lean in favor towards the ruling AK Party.

Results from MAK Consultancy indicate that 48.4 percent of the participants support the AK Party, while 25.4 percent would vote for the main opposition Republican People's Party (CHP), and 14 percent would opt for the Nationalist Movement Party (MHP). In addition, the survey conducted by A&G also indicated similar results showing the AK Party with 50 percent support, the main opposition party CHP at 26 percent and MHP with 15 percent support, while in both surveys conducted the Peoples' Democratic Party (HDP) did not exceed the ten percent threshold.

Despite the violent demonstrations in support of Kobani that erupted across Turkey, especially in southeastern and eastern cities claiming dozens of lives, Turkish citizens still remain supportive of the reconciliation process according the poll. When the participants were asked whether they believe in the success of the reconciliation process, 59.5 percent of respondents remain supportive of the process.

Moreover, the survey addressed the topic of unemployment, with the participants ranking the issue of unemployment as number one, followed by the crisis in Syria and refugees ranking as the second most important issue.