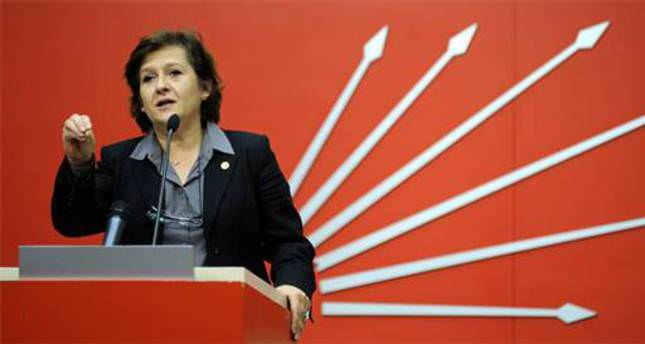 by Daily Sabah Jan 17, 2015 12:00 am
The main opposition Republican People's Party (CHP) İzmir Deputy Birgül Ayman Güler, who has been referred to the party's disciplinary committee, recently sent her defense statement. Güler, who had harshly criticized her party's alleged alliance with the Gülen Movement, has addressed 12 questions regarding the party administration's alleged cooperation with the "parallel structure."

She urged her party to avoid defending the movement and added: "For the last 10 years, [the Gülen Movement] which is responsible for the violation of law, press principles and technical operations should pay the price before the court for wiretapping, leaking illegal wiretapped conversations, fabricated evidence, establishing fake expertise and abolishing the right of defense."

Additionally, regarding her defense statement, which includes 12 questions addressed to the party administration, Güler asked why Aydın Ayaydın, Istanbul deputy and chief advisor to CHP Chairman Kemal Kılıçdaroğlu, had sent a message to Fethullah Gülen, the leader of the movement who lives in the U.S., confirming Mustafa Sarıgül's candidacy for Istanbul mayor in the March 30 local elections. In addition, Güler also wrote in her statement about the March 30 local election results and asked who had permitted the results to be sent to Cihan News Agency from the Ankara provincial head.

Güler also previously claimed that the CHP was cooperating with the Peoples' Democratic Party (HDP) and said this was problematic despite Kılıçdaroğlu's claims that the HDP was forming an alliance with the Justice and Development Party (AK Party).

Meanwhile, in a recent speech, Prime Minister Ahmet Davutoğlu also touched on the conflict in the CHP. "While we are cementing the concept of democracy and freedoms, the CHP is in the mind of tutelage with the parallel structure. One CHP deputy said: 'We made a big mistake by cooperating with the parallel structure.' Here is the confession and the portrait," he said, and called Kılıçdaroğlu "to admit with whom they made an alliance, with whom they stand shoulder to shoulder and made a plan for tutelage," before the March 30 local elections.