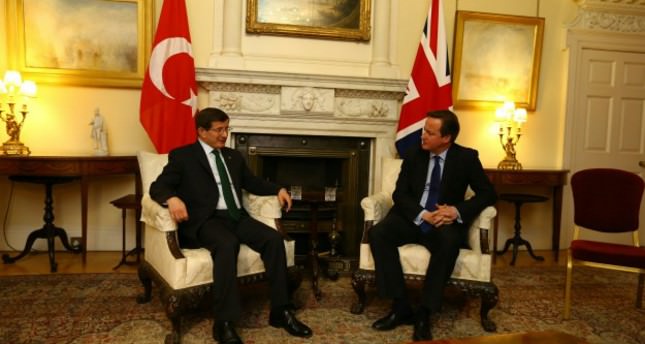 by Anadolu Agency Jan 20, 2015 12:00 am
Prime Minister Ahmet Davutoğlu wished Tuesday that 2015 would be the year when Turkey and Armenia rekindled and shared their friendship instead of regenerating animosity.
His remarks came a day after the eighth death anniversary of prominent Turkish-Armenian journalist, Hrant Dink, who was assassinated in broad daylight in front of his office in Istanbul on January 19, 2007. Dink was one of the founders of the bilingual Turkish-Armenian weekly Agos.
"Hrant Dink was an invaluable Anatolian intellectual who, without compromising either his Armenian heritage or his loyalty to Turkey, sought to help find the ways and means through which Turks and Armenians may build a common future," he told the media at the Ritz-Carlton Hotel in London.
The year 2015 marks the 100th anniversary of 1915 events what Armenia calls "genocide" and the Battle of the Dardanelles that took place in
Canakkale province's district of Gallipoli, which marked a turnaround in favor of the Turks against Allied Forces during World War I.
Davutoğlu said he wished 2015 would be the year of regenerating friendships out of war grief of both peoples. "We all must make an effort to build a new world for peace," he said.
About Turkish-Armenian friendship, he added that Turkey was making a natural and humanitarian call as a moral duty, something which slain journalist Dink always deemed was his "reason for being" throughout his life.
Earlier Tuesday, Turkish premier issued a written statement to commemorate the anniversary of Dink's murder. He called on all Armenians and all those who believed in Turkish-Armenian friendship to "contribute to a new beginning."
"Throughout his life, he strived, mind, heart and soul, to shed light on one of the major issues that the Ottoman Empire passed down to the Republic of Turkey. As someone who personified Turkish-Armenian friendship, he worked selflessly and gave his all, so that the bonds of a historic coexistence could be remembered, and the deep-rooted suffering overcome," said the statement.
Davutoğlu said they wished to open new paths into hearts and minds as they commemorate the anniversary of his demise, and guided by the seeds of friendship he sowed.
The premier reiterated that the relocation policies applied essentially enforced under wartime circumstances yielded inhumane consequences, including that of 1915. Davutoğlu said Turkey shares the suffering of Armenians and, with patience and resolve, is endeavouring to re-establish empathy between the two peoples.
"Only by breaking taboos can we hope to begin addressing the great trauma that froze time in 1915. For its part, Turkey has transcended this critical threshold and relinquished the generalizations and stereotypical assertions of the past," he added.
He believed that both Turks and Armenians, the two ancient nations, can demonstrate the wisdom to understand each other and contemplate a future together.
"Having shared the same geography and a long history, it is only Turks and Armenians who can effectively address their issues together and work jointly to find ways forward," he added.
Turkish premier also emphasized the need to foster a sense of mutual trust and cooperation, to get reacquainted against the backdrop of an 800 years-old common history and promote human interaction.
He also invited their "Armenian friends" to pay more visits to Turkey and do away with respective prejudices.
"We will press ahead with resolve to give due recognition to the Armenian cultural heritage in Turkey and to those Armenian personalities who made inestimable contributions to Ottoman/Turkish culture," he said.
Davutoğlu added that Turkey's desire to share in the pain, to heal the wounds and to re-establish friendships is sincere. "Our course is set towards a horizon of friendship and peace."
Relations between Turkey and Armenia have historically been poor because of incidents that took place during World War I. The Armenian diaspora and government describe the 1915 events as "genocide" and have asked for compensation.
Turkey officially refutes this description, saying that although Armenians died during relocations, many Turks also lost their lives in attacks carried out by Armenian gangs in Anatolia.
Ankara has also long been calling for Armenia and its historians to make a joint academic research and study into the archives of both countries.
In April 2014, President Recep Tayyip Erdoğan-at the time prime minister - offered condolences for the Armenian deaths that occurred in 1915-a first for a Turkish statesman.
Last Update: Jan 21, 2015 9:54 am
RELATED TOPICS