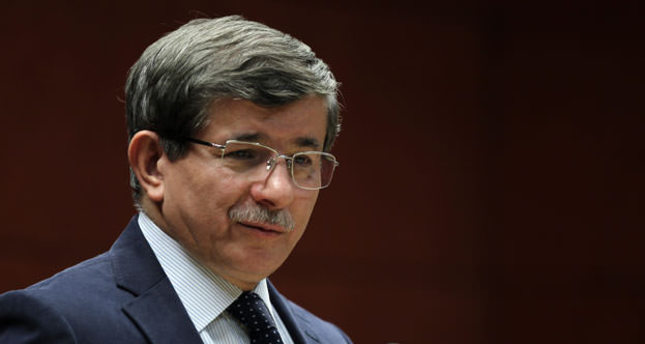 by Daily Sabah Jan 20, 2015 12:00 am
Prime Minister Ahmet Davutoğlu has issued a press statement for the eighth anniversary of the death of the Armenian-Turkish journalist Hrant Dink and expressed his condolences while praising Dink's contributions to Turkey.

"Dink was an Anatolian intellectual who sought ways to build a common future for Turks and Armenians without sacrificing his Armenian identity and loyalty to Turkey" the statement read, praising his contribution to the relations between Turks and Armenians.

Referring to then-Prime Minister Recep Tayyip Erdoğan's condolence letter issued in April 2014, Davutoğlu stated that Turkey is trying to take concrete steps to improve the stalled relations with Armenia and "overcome past traumas."


Davutoğlu stated he believed that Turkey and Armenia together could bring an end to the enmity that has kept the relations captive saying, "Only by breaking taboos can we hope to begin addressing the great trauma that froze time in 1915. For its part, Turkey has transcended this critical threshold and relinquished the generalizations and stereotypical assertions of the past."
"Having shared the same geography and a long history, it is only Turks and Armenians who can effectively address their issues together and work jointly to find ways forward. Fostering a sense of mutual trust and cooperation; getting reacquainted against the backdrop of an 800 years-old common history and promoting human interaction will be essential. Accordingly, we invite our Armenian friends to visit Turkey more often and do away with respective prejudices." Davutoğlu said in the statement.

Hrant Dink was one of the founders of bilingual Turkish-Armenian weekly Agos. He was assassinated in broad daylight in front of his office in Istanbul on Jan. 19, 2007.

Dink, 52, was a human rights and democracy activist and he was considered as one of the most prominent Armenian voices in the country.