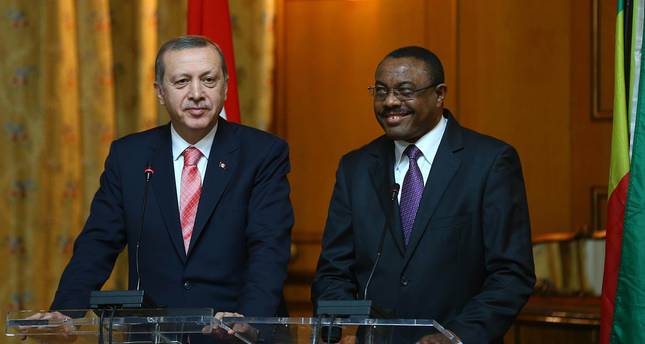 by Nurbanu Kızıl Jan 22, 2015 12:00 am
President Recep Tayyip Erdoğan has called on African leaders to close down schools affiliated with the Gülen Movement and pledged to open new schools to replace them while speaking at a joint press conference with the Prime Minister of Ethiopia Hailemariam Desalegn on Thursday.

Indicating that Turkey would continue to fight elements of the Gülen Movement, which have infiltrated Turkish state institutions abroad, Erdoğan stated that he encourages African leaders to close down schools operated by the Gülen Movement and open new schools established by the Turkish Ministry of Education. He noted that the ministry is carrying out work in this respect and will work in cooperation with a non-governmental organization called DEİK, which is affiliated with the Ministry of Economy.

"As the National Security Council (MGK), we informed the government about unlawful organizations which pose an imminent threat to Turkey's national security and presented our recommendations about the issue" said Erdoğan, noting that Turkey will continue to fight the Gülen Movement in a determined manner under the scope of the rule of law.

The President also stated that Turkey will support Ethiopia's development plan and take concrete steps when Turkish firms are given the necessary grounds to conduct business in a number of fields including the industry, energy and farming.

The Gülen Movement has schools in over 160 countries throughout the world and has faced scrutiny for a number of reasons. Some Gülenist schools are facing closure in Turkey and the United States.
The movement was scrutinized by the governments of Russia, Azerbaijan, Germany and Uzbekistan. The Russian intelligence organization had previously conducted an operation and deported many Gülenists from Russia between 2002 and 2004, with the claim that the movement collects intelligence for foreign states, and all activities of the movement were subsequently banned by Russia's Supreme Court in 2008.

Similar investigations were carried out in Germany when the Office for the Protection of the Constitution in Germany's Baden-Wurttemberg province issued a report stating that schools and organizations affiliated with the Gülen Movement were anti-democratic and posed a threat to the German constitution.

The movement had more than 15 schools in Uzbekistan prior to 2001 when they were shut down on the grounds that the movement was allegedly attempting to interfere in the domestic policies of the country, while the Azeri government expropriated numerous schools and prep schools based on allegations that the Gülen Movement is attempting to infiltrate state institutions, resulting in the transfer of a number of educational institutions including Çağ-Kafkas University in Baku to the State Oil Company of Azerbaijan Republic (SOCAR).

The president arrived in the Ethiopian capital on Wednesday for an official visit and is expected to arrive in Mogadishu on Friday to hold talks with his Somali counterpart, Hassan Sheikh Mahmoud, along with other senior officials. Erdoğan is also expected to visit Turkish projects in the capital, including the Mogadishu Port and a new, ultra-modern hospital and inaugurate Mogadishu's newly-renovated airport.

Turkey has been the most visible foreign country to help war-torn Somalia rebuild its crumbling infrastructure since the 2011 famine.