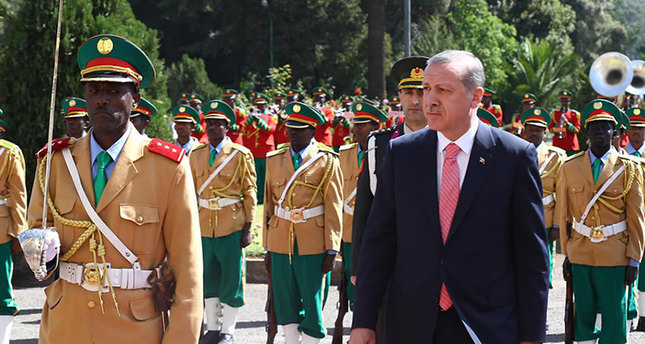 by Anadolu Agency Jan 23, 2015 12:00 am
Turkish President Recep Tayyip Erdogan's ongoing visit to Addis Ababa may help strengthen the already strong relations between Turkey and Ethiopia at both the economic and political levels.

But beyond these political and economic ties, there are cultural relations that are rarely mentioned by the media, even though they date back hundreds of years.

The house of late Turkish businessman Mohamed Ali in Harar, a town 525km east of Addis Ababa, reflects the strong cultural relations that go back more than a century.

The house is now being transformed into a museum that will exhibit the culture and heritage of both countries.

Ali arrived in Addis Ababa in 1875 in the company of Rauf Pasha, a Turkish man who ended up ruling Harar for ten years, according to Mohamed Rabel, a heritage expert from the same town.

He said that, apart from culture and heritage, Turkish nationals continued to live among Ethiopians to the present day.

Two years ago, the Turkish Deputy Prime Minister visited Ali's house in Harar, which, he noted, had become a local landmark.

The Turkish government has since tasked a contractor with renovating the century-old domicile.

"The house will serve as a museum highlighting Ethiopian and Turkish heritage," Rabel said.

He added that the town's Jugol Wall, which was built between the 13th and 16th centuries, contains five historic gates, one of which was renovated by Turkish architects during the reign of Rauf Pasha.

"The gate is still visible until now," Rabel said.

He went on to point out that Turks had contributed to the spread of the Islamic faith across Ethiopia.

The first Ottoman Turkish consulate opened in Harar in 1912, and Turkey's first embassy in Sub-Saharan Africa was opened in Addis Ababa in 1926.

Ethiopia, for its part, opened its own embassy in Turkey in 1933.

Located some 900km north of Addis Ababa, the ancient mosque was the first to be built in Ethiopia.

In Islamic history, Ethiopia was the first destination for Islamic migrants. In the seventh century, these migrants - most of them relatives of Islam's prophet Muhammad - escaped persecution in the Arabian Peninsula and were granted asylum by Ethiopia's King Negash.