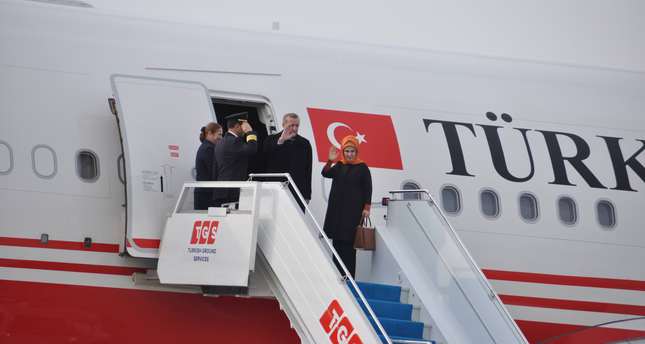 Not cancelling his Somalia trip due to a bombing in Mogadishu, President Erdoğan is expected to visit several Turkish projects, an ultra-modern hospital and will also inaugurate Mogadishu's renovated airport

President Recep Tayyip Erdoğan is scheduled to visit Djibouti on Saturday and Somalia on Sunday despite a deadly car bombing near a hotel in the Somali capital on Friday where a Turkish delegation was staying. Following his Ethiopia trip on Thursday, Erdoğan was first going to visit Somalia, however his trip has been delayed after the president decided to join the funeral ceremony for Saudi Arabian King Abdullah. Somali President Hassan Sheikh Mohamud on Friday confirmed that Erdoğan had postponed his official visit to the country. "President Mohamud has confirmed that the visit of President Erdoğan has been postponed. This is due to the death of King Abdullah of Saudi Arabia," Somali presidential spokesman Daud Aweis said. In Davos, Switzerland Prime Minister Ahmet Davutoğan said three Somalis were killed in the attack that targeted the hotel in Mogadishu.

Erdoğan denounced the attack during a speech he delivered at Addis Ababa University in Ethiopia. "There was again a terrorist act in Somalia today. In whose name are they doing this? If it's in the name of Islam, I am a Muslim and there is no such thing in Islam. Firstly, a Muslim cannot commit suicide," Erdoğan said. "In our religion there is no such thing as going and killing people."

A Somali intelligence official said that the Turkish delegation of around 70 members were staying at the hotel at the time of the attack but were unharmed. He insisted on not being named because he was not authorized to speak to the media. Davutoğlu said it was not clear if the Turkish delegation was the target of the attack and that Erdoğan would go ahead with the visit. Somali police Captain Mohamed Hussein said the bomber drove his explosives-laden car into the gate of the SYL hotel.

Security in the Somali capital Mogadishu has been beefed up significantly ahead of Erdoğan's scheduled arrival. "We are ready for Erdoğan's visit," Mohamed Osman, a senior official at the Interior Security Ministry told press.

"The police, army and the African Union Mission in Somalia [AMISOM] have been deployed at various points in the city to improve security," he said. For instance, the main road linking Mogadishu to Aden Abdille International Airport has been closed. "The road will remain closed until the conclusion of President Erdoğan's visit," Osman said.

Erdoğan is also expected to visit several Turkish projects in the capital, including the Mogadishu Port and a new, ultra-modern hospital. The Turkish leader will also inaugurate Mogadishu's newly renovated airport.

It will be Erdoğan's second visit to Somalia. He first visited the country in 2011 at the height of the Somali famine. Turkey has since been the most visible foreign country to help war-torn Somalia rebuild its crumbling infrastructure.

Somalia has remained in the grip of on-off violence since the outbreak of civil war in 1991. Last year, the fractious country appeared to inch closer to stability after government troops and African Union forces that were deployed in Somalia since 2007 drove al-Shabaab from most of its strongholds. However, the militant group has continued to carry out regular attacks on government forces and African peacekeepers.