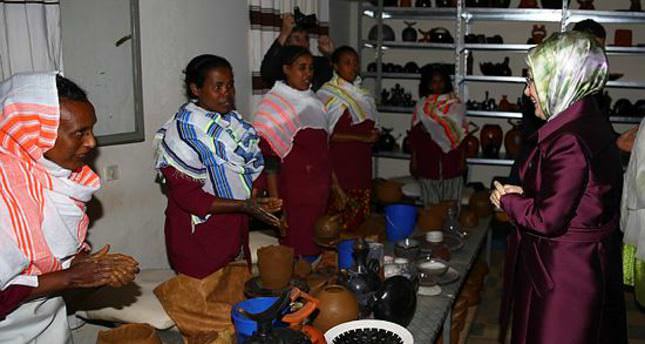 by Zeynep Bayramoğlu Jan 24, 2015 12:00 am
President Recep Tayyip Erdoğan arrived in the Ethiopian capital Addis Ababa on Wednesday as the first leg of a four-day African tour began. Erdoğan was accompanied on this trip by the first lady, Emine Erdoğan.

Emine Erdoğan was accompanied by Ethiopian First Lady Roman Tesfaye on the first day of the trip. After having one-on-one talks, the pair visited the Ethiopian National Museum. She received information from officials about the world's oldest human skeleton – 4 million-year-old Lucy – at the museum. Following the visit to the museum, which also showcases artwork regarding the history of Ethiopia, the two first ladies headed to a nongovernmental organization that conducts work for patients with AIDS. Emine Erdoğan then visited a textile producer and bought some items.