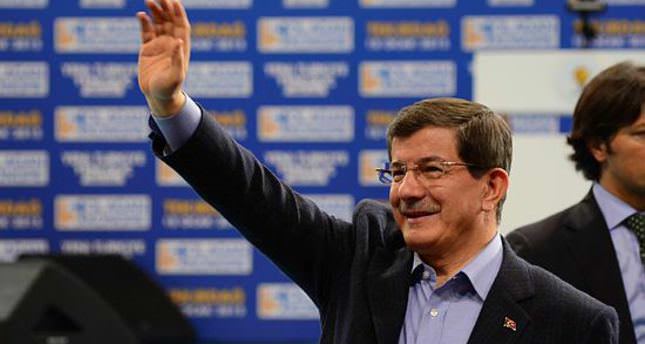 by Mehmet Solmaz Jan 25, 2015 12:00 am
Turkey's reconciliation process, which aims to end the decades-long conflict with the PKK, is being targeted by provocateurs, but it is destined to reach a permanent peace, according to Prime Minister Ahmet Davutoğlu.

Speaking to a large crowd at the ruling Justice and Development Party's (AK Party) convention in the mainly Kurdish populated province of Diyarbakır on Sunday, Davutoğlu began his speech by saluting the crowd in Kurdish. Highlighting the government's commitment to the reconciliation process, Davutoğlu said the process "belongs to the nation and it promises a brighter future" for the whole country.

"While we try keeping these brothers, who lived together for centuries, together, some circles try to separate us with their provocations. We initiated this reconciliation process as a national project, and we will make it a success. The mothers of this country cried for their dead children for 30 years. We are determined to put an end to this. We [Turkey] faced various troubles, when we try to solve this issue," Davutoğlu said.

The prime minister later gave three points that highlight the importance of the reconciliation process: The mutual history of Turks and Kurds, the need for equal rights and the contribution to peace and stability in the Middle East.

A survey conducted by the Ankara-based Objective Research Center (ORC) revealed that 63.4 percent of participants supported the process, 30.8 percent did not back the AK Party-initiated process and 5.8 percent did not give an answer.

Launched in 2009 by the government, the reconciliation process aims to normalize life in eastern Turkey and has reduced the casualty numbers of PKK and Turkish soldiers to record lows. The PKK announced a cease-fire on March 21, 2013, through their imprisoned leader, Abdullah Öcalan, which has accelerated negotiations, thereby mostly ending the violence that has claimed the lives of more than 40,000 people over three decades.

Pro-PKK street protests took place on October 6-7 over fighting in the Syrian Kurdish town of Kobani, close to Turkey's southern border, threatening to cast a shadow on the reconciliation process. Dozens of people, including two policemen, were killed, as several protesters took to streets across the country upon a call from the pro-Kurdish Peoples' Democracy Party (HDP). The protests quickly turned into a clash between pro- and anti-PKK Kurds, leaving over 40 people dead.

Commenting on the deadly clashes in October, Davutoğlu said, "We put the reconciliation process into a legal frame in Parliament. We established commissions and institutions for this. Just when we initiated this process, some provocateurs started the October 6-7 Kobani incidents, which were not actually supporting Kobani. Could the country [Turkey], which took 197,000 brothers from Kobani into its country, forget Kobani?"