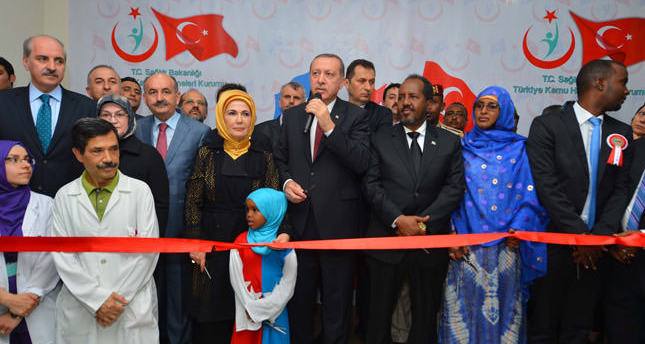 President Erdoğan, accompanied by ministers and businessmen, paid an official visit to Somalia yesterday, drawing praise from local officials for what Turkish aid had achieved since 2011

President Recep Tayyip Erdoğan yesterday visited Somali capital Mogadishu on the last leg of his Africa tour, receiving a hero's welcome for the help Turkey extended to the country in the past few years and going ahead with the visit despite last week's bombing that targeted a Turkish delegation.

The visiting Turkish delegation, which also included the president's wife Emine Erdoğan and senior ministers, arrived to attend the opening of the terminal building of Mogadishu's international airport (right) and the Somalia-Turkey Education and Research Hospital, both of which were completed with significant Turkish contributions. Erdoğan, who became the first non-African leader to visit the famine- and war-afflicted country in 20 years when he, as the prime minister, paid a visit to Mogadishu in August 2011, has been at the forefront in efforts to rebuild Somalia.

The former Somali envoy to the U.S. writing for Al Jazeera, Abukar Arman, said it was no surprise that the Turkish president would receive a hero's welcome in his country, adding that, "The fact is, Erdoğan has done for Somalia what no other world leader has done in decades."

During the inauguration ceremony of the terminal building, Erdoğan said, "I wish from God that this terminal building and the airport will benefit our Somalia, which has suffered greatly," adding that there will be daily flights from Istanbul to Mogadishu. Erdoğan, who delayed his visit for a few days to attend the funeral of Saudi Arabian King Abdullah, said Turkey's commercial and humanitarian aid to the country would continue.

Somali President Hassan Sheikh Mohamud, speaking at the ceremony, said, "The president and my brother Recep Tayyip Erdoğan, your Somali brothers and sisters welcome you. Today is an important day. It will be remembered in Somali history. We are glad you can be a part of it. There are huge differences between the Mogadishu you visited before and the city today. These differences are due to efforts and aid extended by you and the Republic of Turkey. The people of Somalia will not forget this."

Concerning Thursday's bomb attack near a hotel accommodating a Turkish delegation in Mogadishu, Erdoğan said he did not believe it was targeting Turkey. "I do not want to think it could be so," he said.

Somalia has been one of the largest aid recipients from Turkey, amounting to hundreds of millions of dollars spent in infrastructure and various other projects, since 2011.

The two presidents later went to attend the inauguration of the Somalia-Turkey Education and Research Hospital, which has a 200-bed capacity and has been operational since September 2014. The hospital was built by the Prime Ministry's Turkish Cooperation and Coordination Agency (TİKA). In accordance with the bilateral agreement signed, the Turkish Health Ministry will provide funding and personnel to the hospital for five years and it will be handed to the state of Somalia without charge at the end of the period.

The Health Ministry will also assist the country in developing a sustainable health system and will train much-needed personnel. The ministry will also allocate cover of around $85-million for the projected five-year upkeep and operation of the hospital. There are currently 52 Turkish nationals and 91 Somalians working at the hospital.

Prior to his Mogadishu visit, president Erdoğan paid an official visit to Djibouti. Speaking at the country's National Assembly, where he said that Turkey would provide scholarships for 3,500 African students studying in Turkey. He stated that there were currently 65 students from Djibouti studying in Turkey and that he wished to raise the number to 100. He also commented on the situation of the two countries on the two different continents, saying: "Although both countries are models of stability, the instability of the region, the conflicts and terrorism affect them directly."