CHP deputy: Gülen Movement has blood on its hands 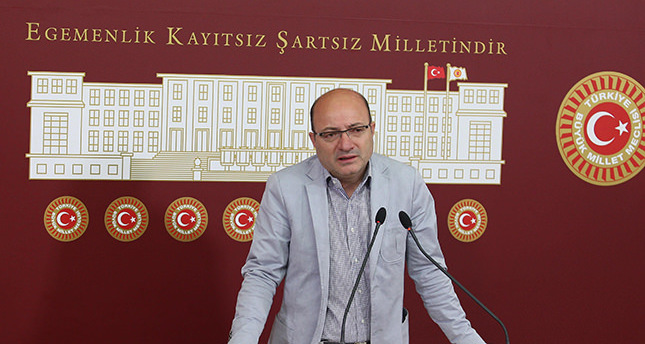 by Daily Sabah Jan 26, 2015 12:00 am
A deputy of the main opposition Republican People's Party (CHP) and former prosecutor, İlhan Cihaner has said that the Gülen Movement, which is led by the retired imam Fettullah Gülen, and whose members allegedly infiltrated state institutions to topple the government, might choose the CHP as its new objective for cooperation and slammed party members who try to get close with the movement.

Speaking to the daily HaberTurk, Cihaner said that he cannot stand with the Gülen Movement because it has blood on its hands. "Nothing can force me to appear shoulder to shoulder with the Gülen Movement. I cannot stand with them because their hands are bloody." Cihaner also said that the movement needs to side with a political party in order to keep their interests alive. "They are now a tremendous structure. They are organized everywhere. Then, it's comprehensible to side with different power groups for their maintenance. They need this type of a relation," he said, and added: "They cannot survive without connecting themselves with a political movement. Therefore, Gülenists might have chosen the CHP as their objective. Meanwhile, some people in the CHP might consider this a good idea. However, in my opinion, that's just carelessness."

A survey conducted by the Ankara-based Objective Research Center (ORC) said 51.8 percent of CHP voters thought that the CHP and Gülen Movement, which allegedly infiltrated the police and judiciary to topple the government, were allied since the March 30 local elections, while 30 percent did not believe such an alliance existed and 18.2 percent refrained from answering the question. Conducted in 30 provinces with the participation of 2,000 CHP voters between Jan. 2 and Jan. 7, the survey asked CHP supporters about the latest developments and allegations regarding the main opposition party. According to the poll, 86 percent of those surveyed believed that the CHP and Gülen Movement are in an alliance and do not support their cooperation, whereas 14 percent said that the alleged alliance does not bother them.

In the past weeks CHP İzmir Deputy Birgül Ayman Güler explained the Gülen Movement's relation with political parties through a metaphor: "The movement is like a barnacle. Barnacles cannot maintain their lives without clinging to whales. After a while, they make the whales heavy and the only way for the whales to get rid of them is by rubbing themselves on the land in shallow parts of a sea. The Gülen Movement clung to the AK Party, but the AK Party saved itself. Now they are trying to cling to the CHP. Unfortunately, our friends [in the CHP] say 'why not?' "

Cihaner, who was the chief public prosecutor of the eastern province of Erzincan, launched an investigation into the Gülen Movement in 2007 on charges that it was "attempting to eliminate the constitutional order through violence and force." When he began to collect evidence of alleged criminal activities such as the fixing of state contracts and obstruction of justice by members of the movement, Cihaner claimed that he received information about illegal financial transactions within the Gülen Movement. But then, in response to pressure from the Supreme Board of Judges and Prosecutors (HSYK), he was taken off the case. In 2010 Cihaner was accused of being a member of the ultranationalist Ergenekon organization, a group which had allegedly planned to overthrow the government. "Anyone who messes with Gülen is destroyed," he said. Later he was released from prison after six months to run a successful campaign for Parliament in the 2011general election.