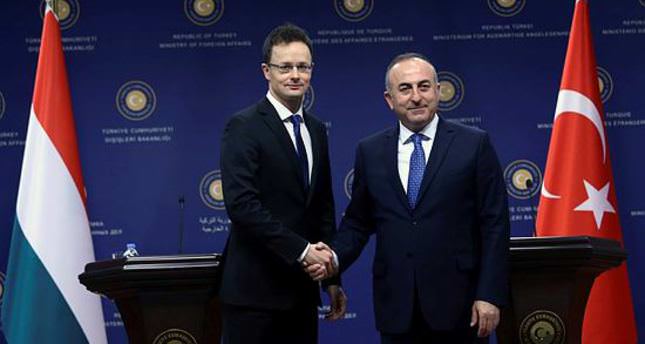 by Anadolu Agency Jan 26, 2015 12:00 am
Energy cooperation, trade volume and EU membership topped a high-level meeting on Monday between Hungary and Turkey's foreign ministers in Ankara.

During a joint press conference with his Turkish counterpart, Hungary's Peter Szijjarto said: "I would like to stress that we look to Turkey as an important partner of the EU and Hungary. We support all kinds of negotiations and talks between Turkey and the EU."

Stating that the EU has lost significant part of its competitiveness during the last years, Szijjarto said: "We think that in order to regain competitiveness, we have to work together very closely with those countries and regions of the world which are emerging rapidly and which produce significant economic growth."

Szijjarto added that Turkey was one of these countries.

Turkish foreign minister Mevlüt Çavuşoğlu thanked the Hungarian government for its "unconditional" support for Turkey's membership of the EU.

Turkey and Hungary are aiming to boost trade volume to $5 billion and are examining new energy polices after Russia's axing of its South Stream project in December.

"We are looking for new alternatives since the cancellation of the South Stream project and Turkey is an important factor," Szijjarto said.

Last month Russia scrapped its South Stream project, which had been intended to carry gas under the western part of the Black Sea to Bulgaria and further into European markets.

Russian president Vladimir Putin offered a new gas pipeline route via the Black Sea to reach Turkey's northwestern Thrace region. Additionally, a gas hub to be constructed at the Turkish-Greek border is planned to transfer gas further into Europe.

Turkey applied for EU membership in 1987 and accession talks began in 2005. Negotiations reached a stalemate in 2007 because of Turkey's position on the Cyprus issue and opposition to its full EU membership by the German and French governments.

To gain membership, Turkey has to also successfully conclude negotiations with the EU in 35 policy chapters which involve reforms and the adoption of European standards.