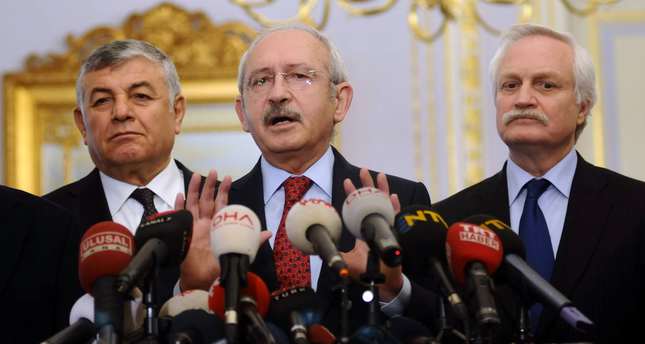 by Merve Aydoğan Jan 26, 2015 12:00 am
The main opposition Republican People's Party (CHP) continues its initiative to change the party's political approach by including politicians with a background on the right of the political spectrum. Following the meeting on Thursday last week at a dinner with conservative leaders and ex-politicians, the CHP Chairman Kemal Kılıçdaroğlu set off party's work to release candidates with conservative backgrounds.

According to local media sources, the CHP is preparing to declare deputy candidates with conservative backgrounds in critical locations for the upcoming June 2015 national elections. Additionally, while the government is working to finalize a comprehensive reform package, which is expected to be launched in February, and will attempt to tackle the age-old problems of the Alevi community, the CHP also took a step to address the Alevi issue to avoid public pressure from its voter base.

Kılıçdaroğlu aims to double the party's votes by nominating Abdüllatif Şener, a former Justice and DevelopmentParty (AK Party) politician who failed to establish his political goals with his now defunct political party established in 2009, called the Türkiye Partisi (Turkey Party). The sources also reported that supporters on the left have no objection to Şener's nomination.

Furthermore, Kılıçdaroğlu aims to swing the balances with votes in southeastern Turkey through arranging meetings with "influential family" leaders. In addition, Mansur Yavaş, who ran as a CHP candidate for the Ankara Metropolitan Municipality in the March 30 local elections, the former president of the Presidency of Religious Affairs Ali Bardakoğlu, and the grandchild of former prime minister Adnan Menderes, who governed the country between 1950 and 1960 and was hanged by the military junta after the 1960 coup, whose name is also Adnan Menderes, are expected to be nominated as candidates from the CHP.