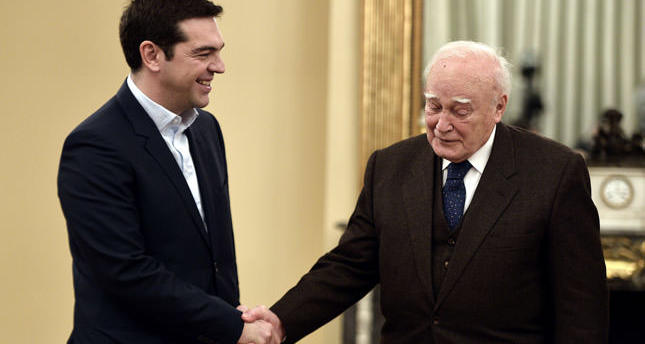 The election victory of the 41-year-old leader, Alexis Tsipras, and his anti-austerity Syriza party will not damage relations with Turkey, political experts say. In his pre-election remarks, the Syriza leader also pledge cooperation with the country’s eastern neighbor

The Coalition of the Radical Left (Syriza) rose triumphant in the Greek general elections on Sunday, Jan. 25. With 36.34 percent of the vote, Syriza won 149 seats in the 300-seat parliament, and the New Democracy party led by Prime Minister Antonis Samaras came a distant second with 27.86 percent and 76 seats. As another party whose percentage of votes was a burning question, the extreme far-right Golden Dawn party received 6.31 percent, giving them 17 seats in parliament.

Syriza's 41-year-old leader, Alexis Tsipras, said: "Greece leaves behind the austerity of destruction," in his victory speech just after the elections on Sunday and added: "Hope has written history and Greece is turning the page. Our people have taken a step forward in history. From tomorrow we begin hard work. The people's verdict cancels the memorandums of austerity and destruction and makes the troika [the European Commission, European Central Bank and the International Monetary Fund] a thing of the past."

Expressing his appreciation for the elections being held in a democratic atmosphere, Foreign Minister Mevlüt Çavuşoğlu emphasized the significance of everybody having respect for the election results and mentioned that three Turks were elected deputies in the elections.

Speaking at a press conference on Monday, Çavuşoğlu also stressed the urgency of defusing the tension in the Aegean Sea, revitalizing the Cyprus peace talks and cooperating on oil and natural gas drilling in the Eastern Mediterranean. "Greece has a remarkable role in these issues. We really want to work with Greece in restarting and accelerating negotiations [on Cyprus], and taking the necessary steps for breaking the ice. We saw that understanding also exist in Syriza. Even Alexis Tsipras had said, 'We are not from the same ideologies, but we are watching what you are doing for Turkey with appreciation. Therefore, if we come to power in the elections, we will continue to work with Turkey.' "

Meanwhile, Syriza struck a deal with a conservative Independent Greeks (ANEL) party on Monday to form a government to confront international lenders and reverse years of painful austerity. "From this moment on, there is a government, we will have a vote of confidence for the new prime minister," Independent Greeks leader Panos Kammenos said after meeting with Syriza leader Tsipras.

Accordingly, it is unknown what kind of a policy Syriza will follow on a variety of issues with its conservative partner such as the EU, or peace talks on Cyprus, which will have an impact on relations with Turkey.

"It is clear that Syriza's election to power has already stirred debates in Europe and renewed discussions about the problematic nature of austerity measures and alternative ways of dealing with them," Zenonas Tziarras, a foreign policy and Middle East expert at Strategy International, a Thessaloniki-based think tank, said. Claiming Syriza's victory will "give impetus to leftist movements throughout Europe; something that could have an impact on EU policy in the medium-term," Tziarras foresees that the party will not interrupt Greece's membership in the EU, or even the Eurozone.

"It means, however, that it will try to change the methods, tactics and policies employed to deal with the economic crisis and its relations with the EU member states, and not least with Germany. Tsipras also vowed that on the next day of the election there will be no troika or austerity memorandum," he said, "If Syriza takes that path, or tries to renegotiate the memorandum on unacceptable terms, it could pose obstacles to its relations with the EU and the IMF, which in turn could have serious implications for the country's economic and political future, especially if Syriza doesn't follow a comprehensive strategy or have a plan B."

Regarding the impact on the Cyprus peace talks and therefore, Turkish-Greek relations, Tziarras is of the opinion that Syriza's position on the issue would not be very different than the previous government. "It's worth noting that Tsipras mentioned the prospect of a settlement on Cyprus and regards international law in terms of U.N. resolutions on Cyprus as a prerequisite for an effective Greek-Turkish relationship and cooperation. Syriza also supports the fact that negotiations in Cyprus cannot restart as long as Turkey's Barbaros survey vessel remains in Cypriot waters. Eventually, the re-launching of negotiations will depend on the willingness of both communities and Turkey to make concessions and take de-escalations measures," he said.