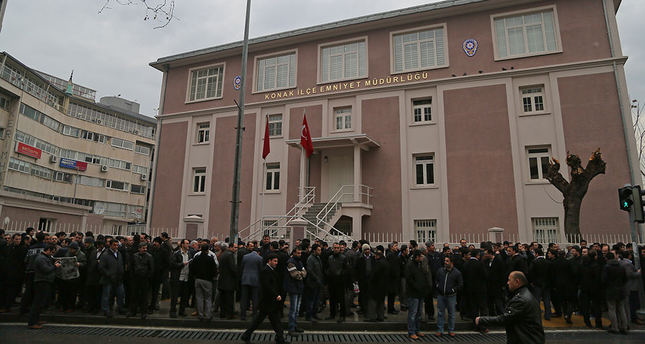 by Anadolu Agency Jan 27, 2015 12:00 am
Police detained 16 suspects in an ongoing new operation against suspected policemen who were allegedly involved in an illegal wiretapping case, security sources said Tuesday.

Izmir's prosecutor office said the probe was launched on receiving complaints filed by several people, including academicians, military officers and press members, who were allegedly illegally wiretapped by, what the government called, the "parallel state." The prosecutor's office also indicated that the suspects are accused of wiretapping 91 high-level businessmen and officials between 2009 and 2014.

Police launched simultaneous operations in western Izmir province and 11 other provinces, including Ankara, Adiyaman and Erzurum.

The office said it issued the warrants for 26 suspected police officers, including high ranking officers. Of those, 16 were detained so far in Izmir and taken to Izmir police department for testimony.

To date, hundreds of police officers have been detained and testified in the alleged wiretapping probe.

The continued operations follow a December 2013 probe which led to the arrest of several high-profile figures, including the sons of three former government ministers and leading business people.

All those detained in the December operation were later released pending trial.

The government has blamed the wiretapping on the Gulen movement led by U.S.-based preacher Fethullah Gulen, which is also accused of attempting to infiltrate the Turkish state.

The parallel state, according to the government, refers to an alleged group of Turkish bureaucrats and senior officials embedded in the country's institutions, including the judiciary and the police who are working to undermine the sitting Turkish government with Gulen.

The Gulen movement denies all charges.