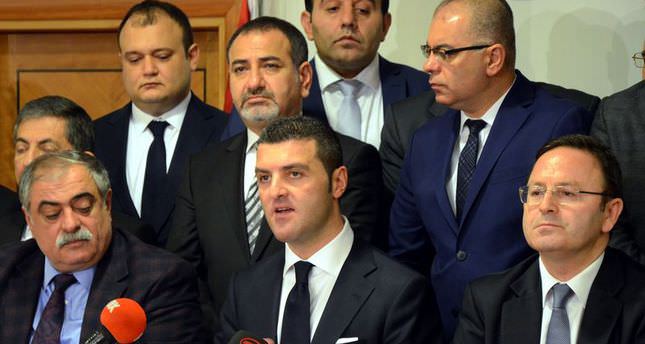 by Daily Sabah Jan 28, 2015 12:00 am
The judicial process launched into allegations that former Republican People's Party (CHP) Şişli Mayor Mustafa Sarıgül and his son, Emir Sarıgül, who served as deputy mayor, threatened current Mayor Hayri İnönü with death to retain power in the municipality, reached a new level of intensity when Mustafa Sarıgül was included in the probe as a "suspect."

The Istanbul Public Prosecutor's Office called Mustafa Sarıgül to testify. A figure who still dominates the Şişli mayoral administration, Sarıgül had been Şişli's mayor for a long time. Having left the CHP about 10 years ago and transferring to the Democratic Left Party (DSP) due to an internal rivalry in the CHP, he returned to the CHP and announced his candidacy for the CHP's Istanbul Metropolitan Municipality race in the March 30 local elections. He did not win the election, but the CHP received most of Şişli residents' votes, and so İnönü was elected mayor of Şişli.

A probe was launched following an interview with the wife of the current Şişli mayor, Nazlı İnönü, which took place on December 18, in which she claimed Mustafa Sarıgül threatened her family with the mafia if her husband did not resign from his position as the mayor of Şişli, a municipality recognized as the fortress of the CHP. On Wednesday, the prosecutor called in Mr. and Mrs. İnönü to give testimony regarding the incident.

Another allegation came to light during the probe. Reportedly, İnönü's advisor, Refref Gülsün Malkoç, said in his testimony since he supported İnönü he was threatened by Emir Sarıgül.

"Emir Sarıgül called me late on November 19. He said: 'We have red lines. Do not cross them. […] Those who stand against us [the Sarıgül family] will pay the price with their lives'," asserted Malkoç.

According to Hayri İnönü, Sarıgül and his son, who served as the deputy mayor of Şişli prior to the crisis, threatened him. İnönü claimed Sarıgül said when the two met on November 5 that nobody would be able to find their corpses or bones.

"You cost me an arm and a leg," Sarıgül allegedly said, according to İnönü, adding that he had hired a mafia team in New York for $750,000 to destroy İnönü and his family. İnönü indicated that Sarıgül had shown him the address of his children's Detroit-based business, which led him to believe that Sarıgül was watching him and his family closely. Sarıgül then ordered İnönü to write a letter of resignation and sign it, according to İnönü, who asked to resign after December 27, following his son's wedding, which was accepted by Sarıgül.

The conflict in Şişli erupted when Emir Sarıgül moved the municipal headquarters to a building in the Okmeydanı district. Hayri İnönü claimed he was denied entry to the new headquarters, which was interpreted by many as a move to establish a coup in Şişli by Mustafa Sarıgül to take over.
Emir Sarıgül resigned in December. His resignation followed a shuffle in the municipal administration by Hayri İnönü, which removed Sarıgül's administrative powers.