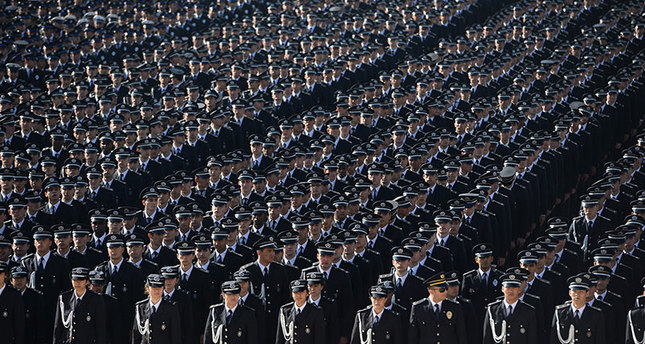 by Merve Aydoğan Jan 28, 2015 12:00 am
New information on the Gülen Movement's alleged infiltration of various institutions in Turkey could indicate that candidates who wished to enter the Turkish Police Academy in 2012 were provided with exam booklets. According to local media sources, a certain individual who used to stay at the homes of members of the Gülen Movement, and who wished to enter the Police Academy, said that he was provided with the Public Personnel Selection Exam (KPSS) and exam booklets for the police academy in 2012.

Recently, local media outlets reported on a Gülen Movement Oath of Commitment to Hizmet (Turkish for "service"), which was penned by the movement's leader Fethullah Gülen. The reports claimed that members, including those who have positions in the police, military and judiciary, are required to take an oath to confirm their involvement and commitment to the movement. Furthermore, this particular individual who was residing in the houses of members of the movement in 2012 claimed: "One week prior to the exam, members invited us to a house in Istanbul's Eyüp district and asked us to turn off all mobile devices. They told us to pray and start reading the Quran so that the 'abi' [Turkish for older brother] could see us in such a way." The former-member also claimed that the "abi" from Ankara was also the regional head, and brought the oath for them say.

Furthermore, the individual also claimed that once everyone in the house had taken the oath, they were provided with almost all the booklets and were asked to memorize all the answers in order to succeed in the examinations. The individual also claimed that he was told not to mind the relevance of the situation, as they told him to only obey what they tell them. Additionally, a voice recording leaked to media in April 2014 also revealed an alleged Gülen Movement scheme to help their members pass a 2011 exam for the Police Vocational School (POMEM). In the recording, allegedly recorded at the Police Directorate headquarters in Ankara, a man instructed other supposed fellow-Gülen Movement members to infiltrate their way into law enforcement. The man, who claimed to be head of police training services, told Gülenist officers overseeing the exam how to help police hopefuls to cheat.

In addition, the prosecutor's office in Ankara, began an investigation on Jan. 16 regarding the allegations of the 2012 exam as to whether the questions and answers were provided to some applicants before the exam.