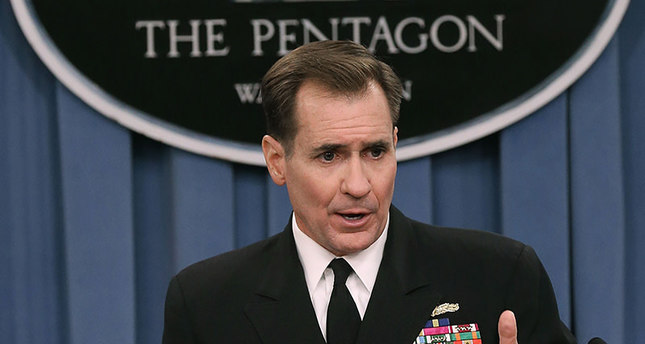 by Ragıp Soylu Jan 28, 2015 12:00 am
The U.S. Defense Department on Tuesday described Ankara's permission to Peshmerga forces to cross into Kobani through Turkey as an "important moment" to push back ISIS from the North Syria town that was besieged for 134 days.

Defense Department Press Secretary Rear Admiral Kirby said that there was no single tipping point in Kobani's successful defense against extremist group and underlined the importance of coalition airstrikes and having a reliable partner on the ground in Kobani who was able to help finding targets.

Admiral Kirby also included Turkey's efforts to his depiction of important moments in Kobani that helped the push back. "It was an important moment when the Turkish government allowed resupply through Turkey to Kurdish forces inside - resupply and actually additional resources in terms of manpower into Kobani." he said.

The Kurdistan Regional Government (KRG) leader was also quick to thank Turkey for her role in aiding the forces that fought back ISIS from the northern Syrian town. "I thanked Turkish President Erdoğan and Prime Minister Davutoğlu for their efforts. Had they not been so brave, peshmerga forces would have not been able to arrive in Kobani to help [Kurdish fighters in the town]. Turkey played a significant role in sheltering refugees from Kobani," Prime Minister Nechirvan Barzani said on Monday.