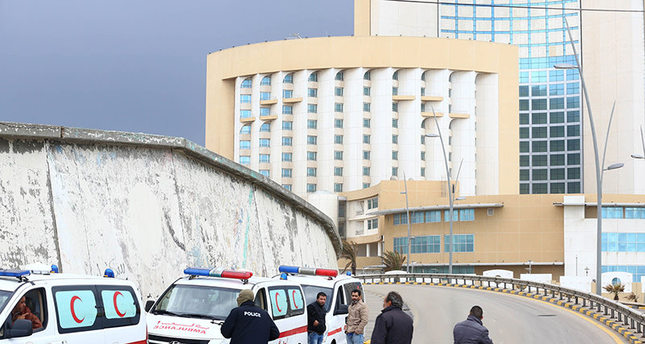 by Anadolu Agency Jan 28, 2015 12:00 am
Turkey strongly condemned an attack on a prominent hotel in the Libyan capital, Tripoli, that left 12 people dead, including four suicide bombers on Tuesday.

"We wish God's mercy upon those who lost their lives, convey our sympathies to their families and wish for speedy recovery to the wounded," Turkish Foreign Ministry said in a statement.

Persistent peace and security in Libya can only be achieved through the establishment of a national unity government, the statement added.

The ministry also said that Turkey supported and attached importance to the continuation of an inclusive political dialogue process in the volatile country.

Libya has remained in a state of political turmoil since the ouster and death of longtime strongman Muammar Gaddafi in 2011.

Over the past year, the conflict has evolved into a violent power struggle between two rival seats of government.

Vying for legislative authority are an internationally-recognized House of Representatives, which convenes in Tobruk, and the General National Congress, which - even though its mandate ended last year - continues to convene in Tripoli.

The two assemblies back two rival governments respectively headquartered in Tobruk and Tripoli.

While the House of Representatives is supported by much of the Libyan army and troops loyal to former army chief Khalifa Haftar, the General National Congress is backed by militias that helped topple Gaddafi in 2011.