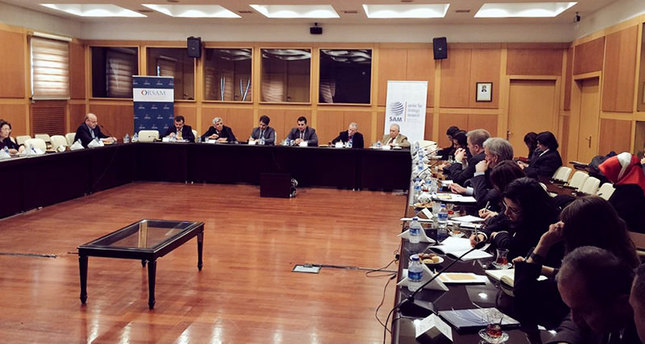 by Merve Aydoğan Jan 29, 2015 12:00 am
As the situation in Syria, caused by the Assad regime and the Islamic State of Iraq and al-Sham (ISIS), continues to deteriorate daily, a panel organized jointly by the Ankara-based think tanks the Center for Middle Eastern Strategic Studies (ORSAM) and the Center for Strategic Research (SAM) of the Ministry of Foreign Affairs of Turkey introduced a report on Scenarios for a Peace Mission for Syria, prepared by Alvaro Vasconcelos on January 28 at the Ministry of Foreign Affairs in Ankara.

The report Scenarios for a Peace Mission for Syria, written by Alvaro Vasconcelos, who is an associate senior research fellow with the Arab Reform Initiative and also a visiting professor with the Instituto de Relações Internacionais da Universidade Sao Paulo (IRI-USP), provided an in-depth analysis of scenarios for a possible peacekeeping mission in Syria by providing recommendations to the U.N., and the EU. During the panel, which hosted a number of representatives from various embassies in Ankara and former ambassadors, Vasconcelos began by saying that "the motive behind publishing such a report was to encourage peace missions in Syria as it is a country experiencing tragedy." He continued the introduction of his report staying that "the Middle East is in turmoil, as countries such as Syria, Iraq and now Libya are failed states."

"We do not know the clear impact of these failed states, but it is a highly concerning situation for Turkey as well as for the rest of the world. The outcome of failed states creates the bases for radical groups, i.e. ISIS, and we are now seeing their advancement not only regionally, but also globally like the incidents that occurred in Paris," Alvaro said. In addition, the crisis in Syria, which Alvaro described not only as a sectarian war, but also regional because there are many involved, such as Turkey and the U.S., supporting the Free Syrian Army (FSA).

The report provided three different possible scenarios for an end to the conflict including an international resolution to the conflict, which Vasconcelos described as very unlikely, an externally-driven settlement achieved via agreement among international powers and finally, a regional solution. Among the three possible scenarios, he described a regionally-led solution as the most likely scenario, which would involve Iran, Turkey and Saudi Arabia, with the eventual backing of the U.S. and Russia. He also added in the report that, "the role of Turkey in this scenario would be to guarantee the security of the areas under control of the FSA."

Furthermore, among the many respectable attendees on the panel, Robert Ford, a senior fellow at the Middle East Institute in Washington who recently retired from the foreign service after serving as U.S. ambassador to Syria from 2010 to 2014 and previously was ambassador to Algeria, made notable statements during the discussion. He said that "if Washington agrees to a peace mission in Syria, it would require working with the U.N., which means to work with Russia."

Ford continued by saying that, "it is very unlikely for Russia to be involved in any action against Syria. However, Iran's influence on Syria is much greater than Russia's currently. Yet, it is unlikely for the Americans to agree to any ground force operation in Syria as it is a very hostile situation."