Gas in island could pass through Turkey 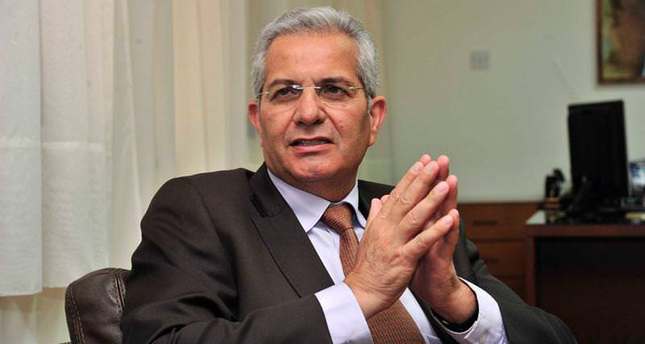 Greek Cypriot main opposition party AKEL, in an exclusive interview with Daily Sabah, said the negotiations that stalled after tension over gas exploration in the Eastern Mediterranean should be revived

Andros Kyprianou, the main opposition Progressive Party of Working People (AKEL) leader in Greek Cyprus, has said that the negotiations that were suspended due to tensions over gas exploration in the Eastern Mediterranean should be restarted.

Speaking to the Daily Sabah, AKEL leader Kyprianou said they were ready for negotiations for gas to pass into Turkey through Cyprus after a resolution in the region. He hinted that Turkish Cypriots also have a claim to gas on the island. "We are ready to share the hydrocarbons equally after the resolution," he added.

Kyprianou also remarked on the latest racist attacks against Islam in various European countries. "It is definitely wrong to act like everything is perpetrated by Muslims. As a left-wing party, we side with respecting all religions. We strongly condemn the attribution of unfortunate incidents to the whole Islamic world," he said.

Negotiations were suspended due to tensions over drilling on the island. What would you like to say regarding the latest situation in the Cyprus negotiations?

We were disappointed by the suspension of the negotiations. The current situation is quite grave. Around two years have passed since Nicos Anastasiades was elected president. And after these two years, negotiations have still not been initiated. Particularly these days, negotiations cannot progress since Turkey is conducting a seismic exploration within our sovereign borders with the NAVTEX decision it issued. We are very worried about this situation. This picture gives a negative message to the international community, giving the impression that Turkish and Greek Cypriots cannot resolve the Cyprus problem. In brief, this problem, which has turned into a necrosis, should be solved.

What would you like to say on the economic and political progress of the country under the administration of President Nicos Anastasiades?

Unfortunately, we are not pleased with it. However, when he came to power, we were already expecting such an outcome. As AKEL, our views regarding the solution of the Cyprus issue is quite clear. We require Turkey to abandon its uncompromising attitude and contribute to the resolution. Also, Mr. Anastasiades must fulfill his requirements consistently and seriously. We see that Mr. Anastasiades does not behave in accordance with the agreed matters. In our opinion, a more consistent manner is possible.

After the Turkish side conforms to this attitude, consensus can be reached within the framework of the High-Level Agreements of 1977 and 1979, on which the two communities would agree. In economic terms, Mr. Anastasiades and his government currently practice a bankrupt prescription. The current economic policy is quite poor. Even government authorities admit this in some of their statements. Austerity policies and cuts and privatization activities through employees always hurt the labor force in the countries where they are implemented. Unfortunately, he completely accepts and implements the harsh measures presented by the troika. We even have observed that the government sometimes presents suggestions to the troika.

Have you ever had any regrets regarding the membership of Greek Cyrus in the E.U.?

AKEL supported the membership process of Cyprus with some tangible ideas. Based on the experience we have had so far, I can say that our experience is not positive. In particular, we do not adopt the socio-economic policies of some leading countries of the E.U., in fact, we are against them. We are against disordering work relations. We do not agree with the foreign policies of the sovereign states of the E.U., which is identified with NATO and the U.S., and we are against the implemented policies in this regard.

The decision we have made and implemented so far is that we are exerting efforts in changing some E.U. policies by struggling with the other political forces in the E.U. We are well aware that this is not easy. I can clearly say that the belief that Cyprus's E.U. membership brought negative consequences is rising not only among the AKEL base, but also across all social segments. We have to say that.

What do you think about the disappointing results of the hydrocarbon exploration off the south of the island? Do you believe there are hydrocarbons in the region?

Above all, we are not experts who can have an opinion on the existence or amount of hydrocarbons in the region. Both the government and the energy companies conducting seismic research in the region stated that there was a high amount of hydrocarbon reserves in the region. We are worried about the developments. They are expressing an inclination to withdraw by limiting the research cost in the total region. Putting the gas to good use is not a result that can be reached in a short time.

A long period of time is needed to unearth the gas. I think gas that has yet to be actually identified is being discussed nowadays. As we think Greek Cypriots and Turkish Cypriots are the children of the same land, we believe that Turkish Cypriots should have an equal share of the gas. We also favor making good and true use of this resource. We should first work on the resolution of the Cyprus issue. If the Cyprus issue is resolved, the hydrocarbon issue will be resolved, too.

As AKEL, we presented very tangible suggestions to Mr. Anastasiades. We made suggestions for Turkish Cypriots and Turkey. We suggested equal administration with Turkish Cypriots on subjects such as processing gas and hydrocarbons as soon as a political resolution is achieved. If this issue is not resolved in a short time, the share of Turkish Cypriots in income obtained from gas and natural resources on Cyprus should be invested in a special fund, and the collected amount should be submitted to Turkish Cyprus.

Also, Turkey should provide aid to Turkish and Greek Cypriots for a federal resolution on Cyprus. After the resolution, we are ready to conduct a close dialogue with Turkey. Thanks to this dialogue, we would be able to define the exclusive economic border zones of Turkey and Cyprus. I also would like to say that a dialogue can be started on the provision of gas in Turkey following the resolution. After the resolution it will also be possible to create a gas pipeline that would start from Israel and end in Turkey via Cyprus. We are not opposed to the transfer of gas to the E.U. through Turkey. However, a solution on Cyprus is essential for that to happen. We want Turkey to give up its provocative stance by sending the Barbaros Hayrettin Pasha vessel to the region.

Recently we have observed a rise in racism and strikes against Islam in many European countries. How do you regard this as a leader of a left-wing party?

As a left-wing party, we are against racism under any circumstances. We defend and support people's right to believe in whichever religion they want and their right to freely perform their religious rituals. We defend respecting differences and diversities. And we are against all kinds of discrimination, whether it is religious or national. We do not approve of it. I would like to highlight that it is not fair to attribute everything to Islam and Muslims and to create an impression that all Muslims are radical and extremist. This is unacceptable. We are against such a mindset. I think all humanity must determinedly fight against extremism, illegal activities and radical practices.

Do you have any message for Ankara?

Resolving the Cyprus issue as part of the method we agreed on in 1977 and repeated many times in the following years would favor Turkey. By introducing a correct solution to the issue, Cyprus can turn into a paradise for both Turkish and Greek Cypriots. Thanks to a resolution, Turkey could overcome a considerable problem it has with its neighboring countries. And Turkey could also make progress in energy planning in the Eastern Mediterranean.

Besides, Turkey will be exempted from some expenses. For instance, the support it provides for Turkish Cypriots would not be necessary anymore. And of course, Turkey's profile will rise in the eyes of the international community. It will be seen as a country that contributed to the resolution of a problem that has been ongoing for decades. To put it briefly, Turkey has so many things to win from a resolution of the Cyprus issue and we are ready to work for it. I am giving my best regards to the Turkish public.