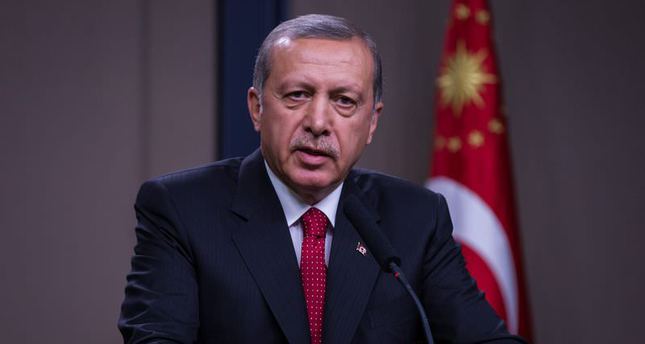 by Anadolu Agency Jan 29, 2015 12:00 am
Turkish President Recep Tayyip Erdoğan said on Thursday that Turkey could have achieved more if a presidential system had been adopted earlier.

"I believe that with the presidential system, we will make more progress concerning rights and freedoms," said Erdoğan.

Turkey has been governed under a parliamentary system for decades. The country has been discussing the possible introduction of a presidential system for a while now and Erdoğan had expressed his willingness for such a change.

Erdoğan added on Thursday evening that Turkey's presidential system model did not have to resemble the United States.'

He proposed that the president could use the authority determined by the constitution and that the current prime minister could act as the first vice president.

A new presidential system has been a topical issue in Turkey, as the country is getting closer to parliamentary elections in June 2015.

Erdoğan also said after the June elections the priority of the political agenda should be the drafting of a new constitution.

"A new constitution is a must for a new Turkey," he said.

A constitutional amendment or a new charter is needed to set up a presidential system in Turkey. The country's current constitution was drafted two years after a military takeover in 1980 and numerous amendments have been made to it since then.

Erdoğan is the first president of the Republic of Turkey to be elected by popular vote. Prior to that he was the country's prime minister for 11 years.
Last Update: Jan 30, 2015 9:22 am
RELATED TOPICS