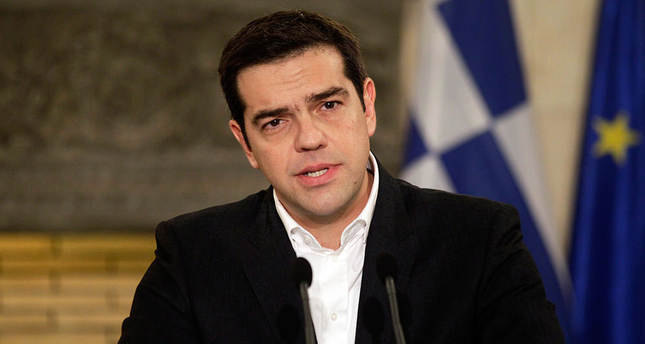 Ahead of Greek PM Alexis Tsipras visit to Greek Cyprus, Turkish officials on the island expressed their hopes that Tsipras would give solution-oriented messages on the Cyprus issue and convince Greek Cyprus to return to the negotiating table

Newly elected Greek Prime Minister Alexis Tsipras is expected to arrive in Greek Cyprus today as part of his first visit abroad as prime minister upon the invitation of Greek Cypriot President Nicos Anastasiades as his message on the divided island and the stalled negotiations between Turkish and Greek Cypriots drew attention.

Speaking to Daily Sabah ahead of Tsipras's visit to Greek Cyprus, Turkish officials on the island said that Tsipras should convince Anastasiades to return to the negotiating table in order to continue the stalled talks over the reunification of the island.

Ergün Olgun, the Turkish Cypriot negotiator, said that there is no huge expectation regarding the Cyprus issue, but Anastasiades should show determination over returning to negotiations to continue the stalled talks.

"There is need of stability and peace on the island. We are here at the negotiating table as the Turkish side. There are two equal publics on the island – Turks and Greeks. There is a need to have equal rights and equal administration to live in unity. There were pledges given by Tsipras before the elections in Greece. He said that he would be respectful to everyone's rights so Tsipras should give fair messages acknowledging Turkish Cypriots' rights."

Professor Dr. Niyazi Kızılyürek, who in 1995 became the first Turkish Cypriot lecturer to work in Greek Cyprus, said that Tsipras would give positive messages during his visit.

Kızılyürek expressed his hopes that Tsipras would give peaceful and solution-oriented messages during his visit. He further said that when the Cyprus issue is solved, Turkish-Greek relations would take one step further.

"I must say that unlike other Greek prime ministers, Tsipras's visit will not escalate the tension on the island. In his busy schedule, he will also hold talks with four Turkish Cypriots and listen to their expectations," Kızılyürek added.

Last week, Tsipras spoke to Turkish newspaper Sabah's Stelyo Berberakis in an exclusive interview. Giving a message of peace and stability in the region, Tsipras said: "We stressed a multifunctional, active and peace- and stability-motivated foreign policy. … We found cooperation with Turkey in the fields of economy, culture, tourism, education, migration, logistics, energy and environment important and we are planning to incline toward these issues."

He also said that even in the toughest time of Greek-Turkish relations, the Coalition of the Radical Left (Syriza) expressed the necessity of peaceful moves to develop trust between the countries. He further criticized the current policies between Greece and Turkey and described them as an obstacle in front of steps to be taken to develop relations.

To overcome these "obstacles," he said that diplomacy channels must be left open and pointed out that he held a conversation with Prime Minister Ahmet Davutoğlu last month in this regard.

When asked his position on the Cyprus issue and if he would take steps to solve it, he said that to find a just and sustainable solution on Cyprus it is important to ensure stability on the island between Greek and Turkish Cypriots, Greece, Turkish-Greek relations and the EU and Eastern Mediterranean.

"[Syriza] support[s] two-sided negotiations based on the initiatives and decisions made by the U.N.," he said, calling on Turkey to withdraw its vessels from Cyprus to resume talks over the divided island.

The 40-year-old leader of Syriza is the youngest prime minister in the country's history. Tsipras was sworn in as prime minister last week, after visiting with the head of the Greek Orthodox Church and announced the office of Greek President Karolous Papoulias.