Erdoğan calls for fight against Gülenist ‘cancer’ in judiciary 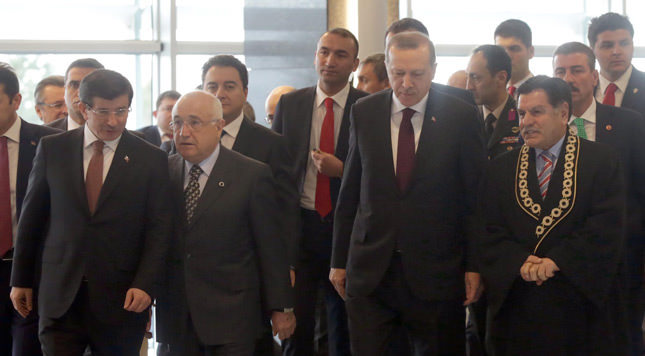 President Erdoğan attended the Justice Academy, where he called on members of the judiciary to act in collaboration in the fight against the members of the Gülen Movement among which are those who are accused of exploiting their posts to overthrow the government

Turkey needs to clear its apparatuses from the "cancer cells" caused by Gülenist infiltration, and judges and prosecutors should act together in purging the judiciary of the shadowy movement, said President Recep Tayyip Erdoğan.

Following his participation in the oath-taking ceremony for the newly-elected member of the Constitutional Court, Kadir Özkaya, Erdoğan headed to the Justice Academy, a body that provides judges and prosecutors with vocational training both before and during their time in the judicial system, where he delivered a speech targeting the "parallel state," an epithet coined by government officials in reference to the Gülen Movement.

In striking comments regarding the current status of the judicial system in Turkey, Erdoğan said that Gülenists, who allegedly infiltrated key state institutions in an apparent attempt to take over the state, had abused justice by exploiting the authority granted to them, and further accused the infiltrators of betraying the country and the nation.

Erdoğan has said that the "parallel state," attempted a coup with the December 17 and December 25 operations by exploiting power in the judiciary and police, which its members had infiltrated, and accused the group of betrayal.

"There is a thin line between justice and cruelty. When the fact that those who are tasked with maintaining justice act on the orders of some organizations instead of their conscious, the situation can be highly alarming," Erdoğan said, alluding to the judicial members of the Gülen Movement who allegedly carried out December 17 and December 25 operations, in which high-level government officials were detained. The operations have been deemed an attempt to topple the elected government since the investigation that implicated ruling party officials became public.

After the operations, Erdoğan, along with other prominent government officials, launched a war against the Gülen Movement, which faced further accusations varying from carrying out illegal wiretapping activities to spying. The government officials rolled up their sleeves to weed out the infiltrators, who they stigmatized as "traitors." Denying all kinds of tutelage in the state's bodies, the ruling party began with eliminating the power that the Gülenists had in the judiciary, which made it possible for them to conduct any kind of operations against those who considered the group a threat.

The latest elections of the Supreme Board of Judges and Prosecutors (HSYK), which ended with failure regarding Gülenists members in the body, was proof of unease among the rest of the judicial members regarding the idea of tutelage in the system of justice.

"Those who hand their conscious and mentality over to a group cannot be a prosecutor or a judge. For a greater Turkey, we should clear society of these cancer cells," Erdoğan added, in hard-hitting words that targeted Gülenist infiltrators.

He also called on the judicial members to do their own jobs and detach themselves from politics.

"We will never let any group rule this nation unless their power is gained by the will of the nation," Erdoğan also said.

Prior to his visit to the Justice Academy, Erdoğan was at an oath-taking ceremony accompanied by Prime Minister Ahmet Davutoğlu, Parliament Speaker Cemil Çiçek, the chiefs of other supreme courts, deputy prime ministers and several members of the cabinet.

The head of the Constitutional Court, Haşim Kılıç, who welcomed Erdoğan at the entrance of where the ceremony was taking place, has said the period when there are calls to institutions in the name of 'saving Turkey' has come to an end.

"The fate of a democratic state governed by the rule of law depends upon effective protection via the elimination of obstacles before rights and freedoms. Universal standards that have been formed about rights and freedoms have now become part of world heritage and have been put to all of humanity's disposal without being discriminated against on the basis of religion, sect and race" Kılıç said.