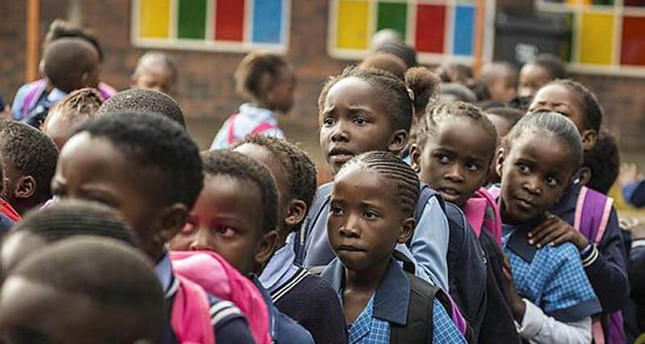 by Anadolu Agency Feb 03, 2015 12:00 am
Deputy Prime Minister, Bülent Arınç, said on Monday that the government has agreed to transform Gülen schools abroad into civil foundations that operate on donations with partial financial support from the state.

The Gülen Movement is run by the retired U.S.-based imam Fethullah Gülen, who is accused of attempting to topple the Turkish government through his followers in state institutions, including the judiciary and police.

"The system we will set up will definitely be a foundation and will operate on a volunteer basis," Arınç said at a press conference held after a Cabinet meeting in Ankara. The last two Cabinet meetings, at which Minister of Education Nabi Avcı presented a detailed plan, focused on designating a program to replace Gülen charter schools abroad.

Arınç said the schools would follow the example of Turkey's Yunus Emre Institutes, which conduct cultural, artistic and scientific activities abroad through Turkish cultural centers. "We must be open and transparent as a government, and we are dwelling on the means to do it in line with the principles of a state of law," he said. Arınç said work is underway on how to establish, fund and supervise such foundations. However, he did not specify how the government would enforce the proposed idea.

He also said that the project is not missionary work, but is an act of education and cultural diplomacy. "A foundation with a civil formation of 70 percent and the other 30 percent public support is possible," he added. He also said a decision was made about the foundation's name, but that Avcı will announce it in the coming days once the project is ready.

The Gülen Movement has over 140 private schools and charity organizations around the world, including the North America, Europe, Asia and Africa. The countries that have Gülen schools have begun to question their mission, deeming its shadowy structure problematic. President Recep Tayyip Erdoğan has emphasized in no uncertain terms that the schools affiliated with the movement should be shut down, citing their alleged illegal activities, and has vowed to replace them with new schools supported by the National Education Ministry.

The plan has been taking shape recently with more details surfacing of how the new schools will be operated. According to the draft, a non-governmental organization will be established, backed by the National Education Ministry, to run the schools and the syllabi and staff will be determined by the ministry.

Educators have expressed positive views of the plan, the preparations for which began last year. The structure of the schools will be non-governmental, and thus structured as an "agency" that will be formed by the joint efforts of non-governmental organizations on a voluntary basis. The agency will both be able to receive and give donations and support projects. It will run the schools that will be opened primarily near where Gülen schools are located.

According to the new legislation, discussions about which are currently under way, the staff will consist of teachers from private and state schools as well as new graduates.

The teachers in question assigned by the ministry will be considered "on leave," and will be paid by the agency. They will be given the opportunity to resume their duty at a national education institution when they return. Activities such as exchange programs and scholarships will be handed over to the agency.