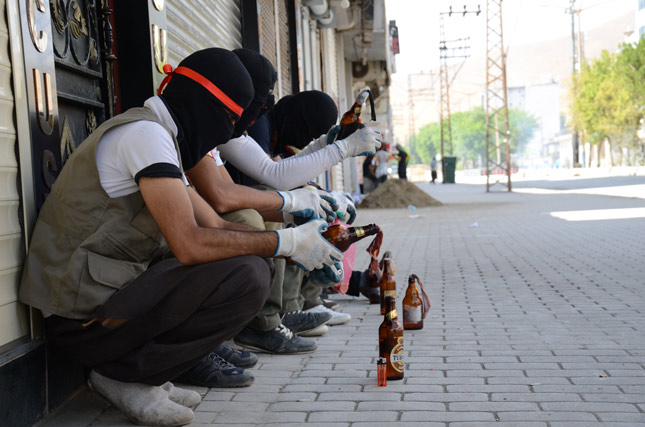 Discussions of the domestic security reform bill, which has been prepared in line with Western templates to prevent violence and vandalism during protests, has commenced amid opposition from the HDP and CHP, which seek changes in the proposed bill

Parliament has begun discussing the controversial security package bill, which seeks to bring solid measures to prevent violence and vandalism that occur during protests in Turkey, in a plenary session held on Tuesday. The discussions of the package, which have already been postponed twice thus far, are finally being held amid intense reactions from opposition parties. The Peoples' Democratic Party (HDP) has delivered the strongest objection to the security reform package and is expected to stall the discussions by offering numerous changes to the bill.

The HDP, which was held responsible for the pro-Kobani protests that resulted in the deaths of dozens and prompted government officials to address tighter security to Turkey, sees the security reforms as an obstruction to the reconciliation process that the government is pursuing in a bid to end the decades-long conflict between the PKK and Turkey.

The security package bill, which envisages tighter measures to prevent street violence, was initially brought up following the Kobani protests. The protests, which erupted out of a demand from the government to show more support to fellow Kurds in Kobani fighting Islamic State of Iraq and al-Sham (ISIS) militants, resulted in acts of vandalism and violence that resulted not only with the loss of dozens of lives lost but also great damage to buildings, vehicles and property.

Following the events, Ankara took up the matter and gave a go-ahead to a draft bill that they consider will prevent such violence from occurring again. According to the new draft bill whose discussions are currently in progress, police will be granted broader powers and the punishments for street violence will be more severe.

The proposed bill, which was prepared in line with European standards of security, freedoms and security regulations, will make it possible for a security officer to search an individual and his or her belongings on grounds of reasonable suspicion. Critics as well as the main opposition Republican People's Party (CHP) have strongly opposed to it on grounds that the term "reasonable doubt" is not clear and can be open to exploitation. Additionally, police officers will be authorized to use lethal force against individuals who attack schools, public buildings and worship areas with Molotov cocktails, explosives or any other weapons, according to the proposed bill.

The CHP also expressed concerns that the excessive powers bestowed on the security forces would be misused. Experts also agreed that void checks and balances, the legislation that grants more powers to security forces, can engender devastating results for the country.

In response to such concerns, Prime Minister Ahmet Davutoğlu had previously said that "granting police officers with unlimited authority is out of the question. The powers given to the police will be restricted and defined. They will account for any violation of authority in the face of [the] law." He added that the government will not deviate from its democratic course while imposing tougher security measures.

Moreover, during any gathering or protest, participants will be forbidden to carry fireworks, Molotov cocktails and slingshots, and punishment will be given for those who use them. Furthermore, with the new bill, those involved in the promotion of terror and those who cover their faces fully or partially during protests can face a five-year prison sentence.

Erdoğan also touched upon the importance of the domestic security package and said that Turkey's future will not be shaped by violent street protests. "You will not succeed" he said, adding, "Nobody will be able to throw a spanner in the works," referring to provocateurs who try to create chaos on the streets.

The president argued that Molotov cocktails are an advanced tool to commit crimes and the government is obliged to take precautions to ensure the security of the people. He referred to the death of an innocent 17-year-old girl by a Molotov cocktail in 2009 when she was on a bus that was attacked by the deadly bomb. He harshly criticized those who oppose the domestic security reform package for prohibiting protestors to cover their faces and imposing strict penalties for those who threaten public order. He reminded the audience that those who oppose the package are in favor of pillaging public works including public transportation vehicles, as well as local shopkeepers whose stores are attacked and damaged during violent protests.