Erdoğan: Steps by Riyadh may change things in Egyptian administration 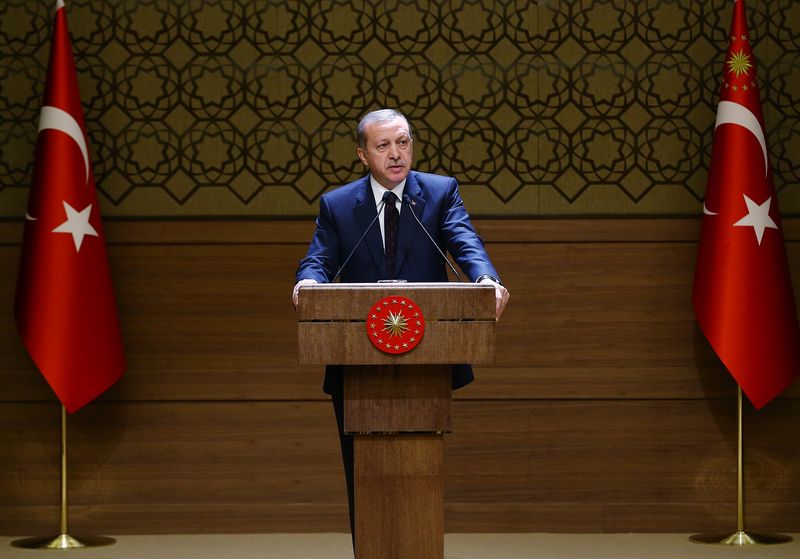 by Daily Sabah Mar 04, 2015 12:00 am
President Recep Tayyip Erdoğan has said that a step to be taken by Saudi Arabia may change things in the Egyptian government and portrayed Saudi Arabia as the most influential country on the issue of Egypt.

Speaking to journalists on his way back to Turkey from Saudi Arabia's capital Riyadh, Erdoğan said that Egypt, Saudi Arabia and Turkey are the most important countries in the region and they all have some responsibilities for the peace and welfare of the region.

Touching on the anti-democratic sanction against political imprisoners, Erdoğan said: "Now, [in Egypt] a president who was elected with 52 percent of the vote [Mohammed Morsi] is imprisoned. There are nearly 18,000 political prisoners. These all show congestion [in Egypt's democracy]. If there is not a controlled softening, it may cause a social outbreak in Egypt."

In response to a question of whether Saudi King Salman made any move to provide a solution to the ongoing tension between Egypt and Turkey, Erdoğan said: "Saudi Arabia of course wants to see peace between Turkey and Egypt at the high level, but there is no insistence."

He also added that when it comes to Egypt, two differences must be taken into account, the Egyptian administration and Egyptian people, as Turkey has no issue with Egyptians.

Erdoğan said that his four-day official visit to Saudi Arabia raised the hopes of developing bilateral ties between the two countries.

According to Erdoğan, Turkey and Saudi Arabia are mostly on the same page on regional issues despite diverging on Egypt. He said that the divergence should not cast a shadow on bilateral ties between the two countries.

"The Egypt issue should be evaluated separately. What is more important to [Turkey] is to have better relations with Saudi Arabia," Erdoğan said.

"Saudia Arabia's stance on regional issues mainly overlaps Turkey's position. Even though there are some divergences on the Egypt issue, it is not at a point that will be able to affect our relations. They [Saudi Arabia] said that they agree with us over [Turkey's] no-fly zone and safe zone [demands] regarding Syria," he said.

The president's trip to Saudi Arabia coincided with Egyptian President Abdel-Fattah el-Sissi's visit to Riyadh. The biggest differences between Turkey and Saudi Arabia's regional policy are their respective positions on the Egyptian coup in which Sissi toppled the first democratically elected leader, Morsi, in 2013.

The first sign of Turkey's efforts to remove clouds on Turkish-Saudi relations came when Erdoğan suspended his African trip in January to attend the late King Abdullah's funeral. A day of mourning was also declared in Turkey following the death of the Saudi king. When he returned from his African trip, Erdoğan stressed that his attendance at the king's funeral and the declaration of the one day of mourning was to show the importance the government attached to bilateral relations. "There are topics that we agree on. On Egypt, as well as on Syria and Palestine there are issues where we don't see eye to eye. We don't want such differences to cloud bilateral ties," he said. Erdoğan also said that he is hopeful about Saudi Arabia's changing its negative stance on the Muslim Brotherhood without prejudgments.

Although both countries are on the same page on the training and equipping of moderate Syrian opposition groups fighting against the regime of President Bashar Assad in Syria, the two have significant differences when it comes to the Egyptian administration. Turkey strongly opposes the Egyptian regime while Saudi Arabia supports it both financially and economically and opposes Egypt's Muslim Brotherhood. With these diplomatic visits that started following Erdoğan's visit to Riyadh, both countries are expected to leave differences aside and develop cooperation on regional issues to form a unity in the Islamic world. Even though experts do not expect a major change in the country's policies under King Salman's rule, they anticipate that Saudi Arabia will review its stance on certain regional issues.