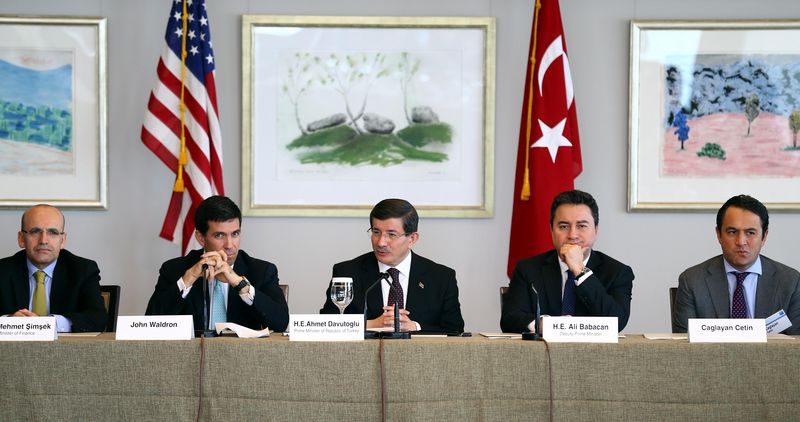 by Anadolu Agency Mar 04, 2015 12:00 am
Turkey is an "island of stability" with a vision for the future and consistent economic growth, Turkey's Prime Minister Ahmet Davutoğlu said on Wednesday.

In a meeting with a group of Goldman Sachs investors in New York, Davutoğlu said political and economic stability are interdependent and Turkey has both.

The Turkish economy has enjoyed a strong growth rate of almost 5.5 percent since 2002, fueled by trade and foreign investment. The growth has been faster than much of the industrialized world.

Turkey's GDP - the broadest measure of economic output and growth - has increased to $840 billion from the modest figure of $230 billion recorded in 2002, when the ruling AK Party came to power.

Davutoğlu said Turkey has seen three general, three local and two presidential elections, as well as two referenda, in the last 12 years and in all these polls the AK Party won with clear majorities.

Turkey retained its political and economic stability even after the presidential election in August 2014, after which there was a significant change in the higher echelons of the government, he said.

"This was the first time ever in Turkish democracy that a ruling party changed its chairman and its prime minister when they were in the government," he said.

He said the latest opinion polls ahead of the June 7 general election indicate that his party stands at 48 to 52 percent while the nearest opposition party is estimated to get 22 to 25 percent.

"Getting a strong base for democratic stability towards the general elections in June, we have a clear vision for all sectors through reforming our economy and making a qualitative change," Davutoğlu said.

The recent move by the leadership of the terrorist group PKK to invite its militants to lay down arms was "historic," he said, and another indication of Turkey's stability in a region beset by war and conflict.

"While Iraq, Syria and some other neighboring countries are being divided based on ethnic and sectarian differences, Turkish society is getting more integrated," he said.

The PKK has fought for an independent Kurdish state since 1984, and its terrorist attacks have claimed approximately 36,000 lives in Turkey.