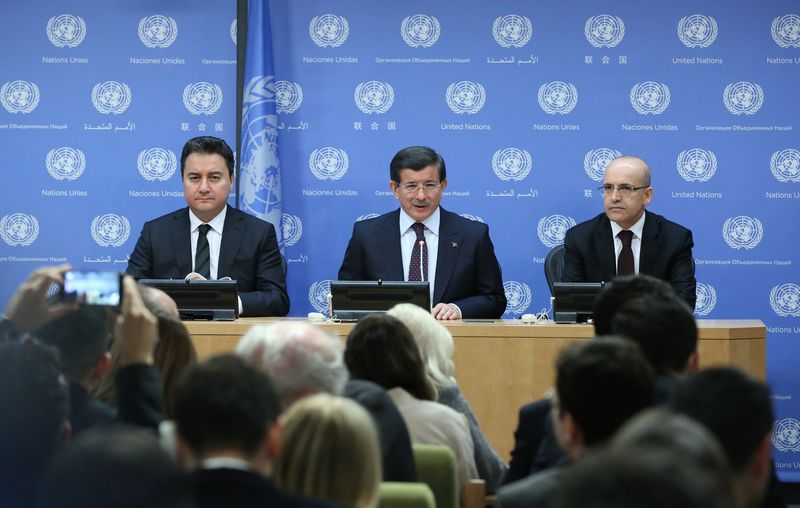 by Nurbanu Kızıl Mar 05, 2015 12:00 am
Prime Minister Ahmet Davutoğlu underscored that the U.N. Security Council (UNSC) lacks a solid strategy to address the crisis in Syria as the ongoing conflict remains to be an obstacle to the establishment of peace in the region.

Davutoğlu spoke at a press conference in New York following a meeting with U.N. Secretary General Ban Ki Moon on Thursday and stated that Turkey's stance regarding terrorism is very clear as it was victimized by terrorism for decades and added that Turkey is in favor of peace and stability in the Middle East and will never let terrorist organizations get near the borders.

Touching upon the crisis in Syria, Davutoğlu said that the U.N. Security Council does not have an explicit strategy to address this problem, nor do they have an urge to enforce sanctions on the Syrian regime for committing war crimes by the unlawful use of chemical weapons. "The Syrian regime does not take into consideration the movement of the refugees and continue to attack Aleppo" Davutoğlu noted, and added that this increases the number of refugees who will come to Turkey to seek refuge. He highlighted that it is the responsibility of the UN to prevent the humanitarian crisis in Aleppo and Syria.

Davutoğlu said that it is crucial for all countries to share intelligence regarding potential terrorists who may cross the border to join terrorist organizations in Syria. "Turkey expects more cooperation and empathy in this regard" he added.

Davutoğlu also said that the Syrian administration never complied with temporary ceasefires. He stated that comprehensive efforts are required to reach a permanent resolution in Syria and that Turkey is ready to offer assistance in this regard.

In response to a question about the relations between Egypt and Turkey, Davutoğlu said that Egypt is the backbone of stability in the region. "There will be no stability in the Middle East if there is no stability in Egypt" he said, while stating that Turkey will never recognize regimes which come to power through military takeovers. "Turkey wants to see peace in Egypt and neighboring countries" Davutoğlu said, and he added that the current Egyptian administration should respect the spirit of Tahrir Square.